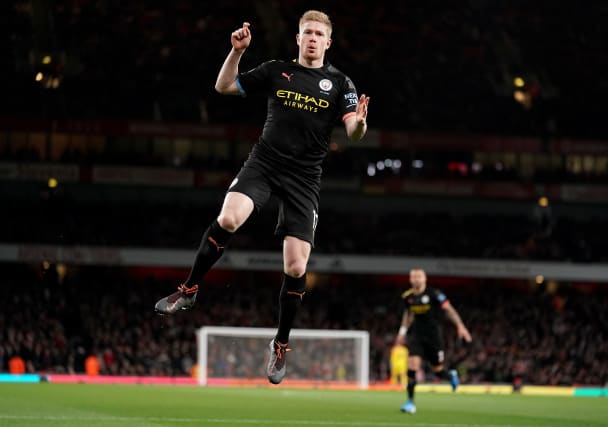 A first-half masterclass from Kevin De Bruyne inspired Manchester City to a comfortable victory over a hapless Arsenal.

Pep Guardiola’s side moved to within four points of Leicester as the reigning Premier League champions bounced back from a derby day defeat to Manchester United last weekend to coast to a 3-0 win at the Emirates Stadium.

De Bruyne struck after just 89 seconds before teeing up Raheem Sterling and adding the third himself as he moves on to four goals across his last five City appearances.

Arsenal, whose best chance came before De Bruyne’s first effort, were second best for the majority of the contest and have now won just one of their last 12 matches in all competitions.

Interim head coach Freddie Ljungberg has taken four points from his first four league games at the helm and the Gunners, who have not won at home since October 24, now sit seven points off the top four and are the same distance clear of the relegation zone.

Arsenal almost took the lead inside the opening minute, Gabriel Martinelli breaking in behind and wriggling free before testing Ederson in the City goal.

While City were tested at the back early on, they once again showed their clinical nature at the other end of the pitch as they went ahead just moments later.

Kyle Walker was allowed to bound forward before playing in Gabriel Jesus, who squared for De Bruyne to finish exquisitely from just inside the penalty area.

The lead was doubled with just a quarter of an hour on the clock, Pierre-Emerick Aubameyang robbed of possession and City again breaking with ease as De Bruyne this time crossed for the unmarked Sterling to tap in at the back post.

Things went from bad to worse for Ljungberg and his players as De Bruyne struck again before half-time and while Arsenal were a man light.

Sead Kolasinac had hobbled off after being unable to recover from an ankle knock but, with substitute Bukayo Saka not ready to make an entrance, City capitalised on the advantage and the Belgian turned home from the edge of the box.

De Bruyne was almost celebrating a first-half hat-trick of tremendous goals only for Bernd Leno to make a stunning save as he turned the latest shot onto the post.

Arsenal would again have the first chance of the half as they looked to reduce the arrears soon after the interval, only for Aubameyang to head off-target.

Jesus should have made it four as he was slipped in by Sterling but he hit his shot wildly over Leno’s crossbar before Guardiola opted to replace Phil Foden, fairly ineffective on his first league start of the season, with Bernardo Silva.

Leno again proved the last line of defence after Calum Chambers had lost the ball to Jesus, who failed to turn his chance past the onrushing Germany international.

In truth, City had dropped down a couple of gears from some of the scintillating football of the first 45 minutes but always had their hosts at arm’s length.

Substitute Riyad Mahrez and Sterling both came close late on as City played out the closing stages with little threat to their goal and with the swagger of a side who should be closer than the 14-point chasm they have to leaders Liverpool.