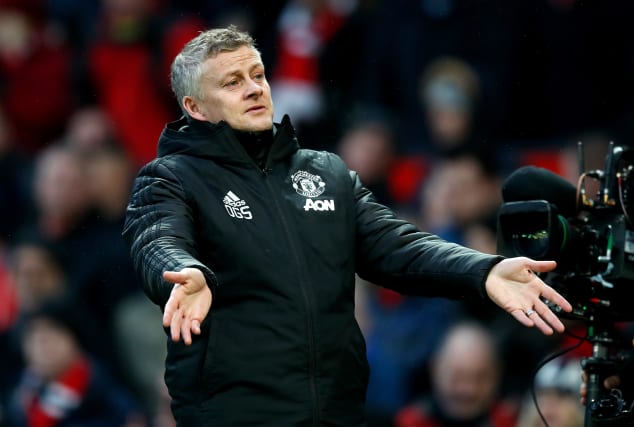 Ole Gunnar Solskjaer is convinced Manchester United remain on the right track despite needing to battle for a point against Everton on Sunday.

The result left United sixth in the Premier League, a place below where they began the weekend, as Solskjaer reaches the first anniversary of his appointment as manager this coming week.

With 25, United are one point worse off than they were when Solskjaer succeeded Jose Mourinho on December 19 last year – but only four points off the top four as opposed to 13 when the Portuguese left.

Solskjaer said: “I’ve really enjoyed it, I think we’re on the right track. One 10-minute spell here was poor, just before they scored, but I’m not going to change my mind from before the weekend.

“I’m looking forward to going into work again because these boys want to improve and learn.

“You always want wins, and you want the momentum to carry on, but we’ve had three wins since the Aston Villa draw.

“We’ve taken a few steps forward and this is not a big step backwards, it’s more of a stand-still, not improving. We are, as a team and a group, going forward.”

United needed to come from behind because Everton, after last week’s victory over Chelsea, again showed a level of commitment that was absent in the final days of Marco Silva’s reign.

Former Toffees striker Ferguson has revitalised the team as caretaker manager, setting the tone with an impassioned performance on the touchline.

The Scot gesticulated and shouted at his players throughout and the message, as he stood in shirt sleeves in the cold and rain, was clear.

Everton are now three points above the dropzone but, despite the change of mood, Ferguson again insisted he was not interested in the job long term.

He said: “I think it’s buying them a bit of time until they can get the right man in. We need the best manager in the world to manage Everton Football Club and I’ve not got the right experience.

“I’m all for us bringing in a top manager and if I can be part of it, brilliant.”

There was controversy over Everton’s 36th-minute goal as David De Gea missed the ball and it rebounded in off Victor Lindelof. It was allowed after a VAR check for a potential foul on the United keeper by Dominic Calvert-Lewin.

Ferguson said: “Someone said he put his arm across the goalkeeper but they’ve got VAR haven’t they? So obviously it’s a good goal or VAR would have picked up on it.”

“It was a clear foul,” he said. “But there’s no point me complaining.”