Duncan Ferguson rules himself out of becoming permanent Everton manager 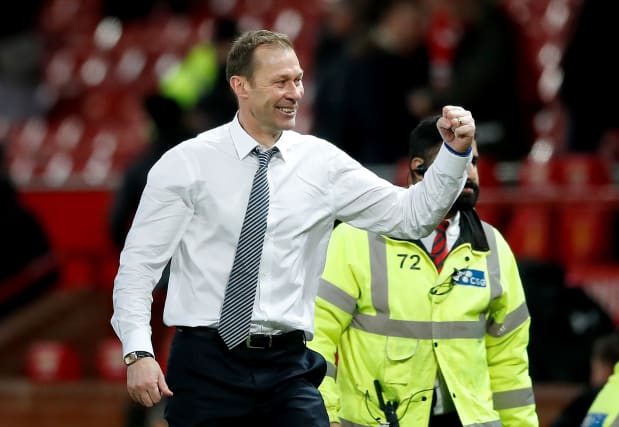 Duncan Ferguson again insisted he is not the man to lead Everton long term despite overseeing another positive result with a 1-1 draw at Manchester United.

The Scot, appointed caretaker manager after the sacking of Marco Silva earlier this month, guided the Toffees to victory over Chelsea last week and followed up with a strong showing at Old Trafford on Sunday.

A Victor Lindelof own goal gave the visitors a first-half lead but the hosts claimed a deserved point in an enjoyable Premier League encounter with a 77th-minute equaliser from substitute Mason Greenwood.

Former Everton striker Ferguson said: “I think it’s buying them a bit of time until they can get the right man in. That’s what a couple of results does, so we can make that process more diligent.

“We need the best manager in the world to manage Everton Football Club and I’ve not got the right experience. I’m all for us bringing in a top manager and if I can be part of it, brilliant.”

There was no doubting Ferguson’s passion and drive from the touchline as he shouted and gesticulated towards his players throughout.

He even stood in shirt sleeves despite the cold and wet weather, although he claimed he was not aware of how bad the conditions were.

Asked if his shirt had dried out, he said: “Yes it’s dry! Someone told me I took my jacket off but I can’t remember!”

He said: “I thought it was a fantastic performance. It was unfortunate we couldn’t hang on for three points but we’d have been made up with one before the game.”

One curious aspect of the game saw Everton substitute Moise Kean taken off after just 18 minutes on the field, to the striker’s obvious displease. Ferguson insisted the change was only about time-wasting.

Ferguson said: “I was just doing it for fresh legs. Unfortunately he was the one I decided to bring off.

United were unhappy with Everton’s goal, believing there to have been a foul on goalkeeper David De Gea but neither referee nor VAR gave anything.

Ferguson said: “Someone said he put his arm across the goalkeeper but they’ve got VAR haven’t they? So obviously it’s a good goal or VAR would have picked up on it.”

The Norwegian said: “It was a clear foul but there’s no point me complaining. It (VAR) will be better next year. They’ll have to look at it.”

After victories over Tottenham and Manchester City the result was a setback for United.

Solskjaer said: “You always want wins and the momentum to carry on. We’ve had three wins since the Aston Villa draw and taken a few steps forwards.

“Today is not a big step backwards, it’s more of a stand still, not improving.”

Solskjaer refused to be drawn on reports linking United with Salzburg striker Erling Braut Haaland with January move to United, but hinted the player has made a decision.

He said: “I don’t comment on them speculations so that’s it. He (Haaland) knows what he wants to do and he knows what he’s going to do. So I don’t have to give any advice to any other teams’ players.”