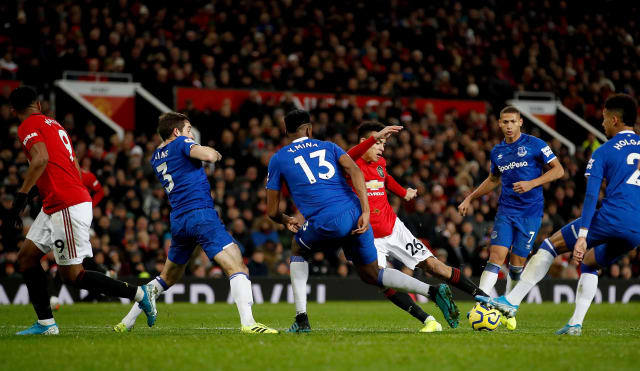 Academy graduate Mason Greenwood came to the rescue on a landmark day for Manchester United’s youth system and earned a share of the spoils against Everton.

Sunday’s Old Trafford encounter was the 4,000th consecutive match in which the club had included a youth graduate in the matchday squad – an occasion that did not go to plan following back-to-back Premier league wins against Tottenham and Manchester City.

Victor Lindelof’s own goal had much-loved caretaker manager Duncan Ferguson bouncing on the touchline in celebration, but homegrown teenager Greenwood came off the bench to deny Everton a first Old Trafford win since 2013 as it ended 1-1.

It was a frustrating afternoon just as Ole Gunnar Solskjaer’s side appeared to have turned the corner, yet it would have been a lot worse was it not for Greenwood, Thursday’s man-of-the-match against AZ Alkmaar.

Injury-hit Everton played with confidence following the impressive win against Chelsea and were on course for another shock triumph when Lindelof turned into his own goal and the video assistant referee cleared Dominic Calvert-Lewin’s challenge on David De Gea.

It extended United’s wait for a Premier League clean sheet to an 11th match and left them with a mountain to climb, leading Solskjaer to turn to the club’s latest academy star.

Greenwood has impressed whenever given the opportunity this season and did not disappoint when brought on in the second half, with the 18-year-old finding space to get away a low shot and secure a point.