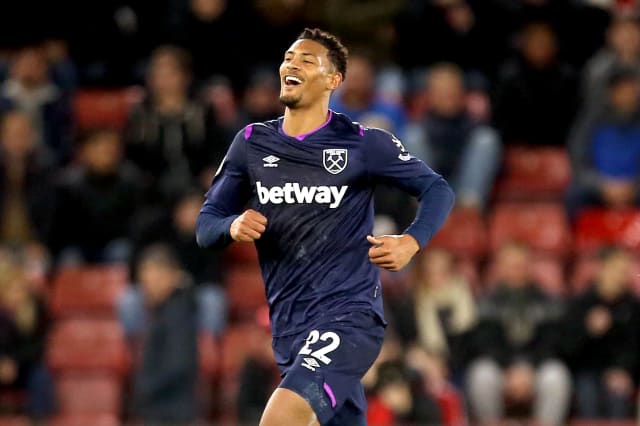 The Hammers’ £45million record signing, who was dropped to the bench for Monday’s defeat to Arsenal, capitalised on his recall by striking for the first time since early October in the 37th minute.

West Ham could have won by a more comfortable margin after seeing strong first-half penalty appeals dismissed and a 52nd-minute strike from Michail Antonio disallowed by VAR for handball.

The deserved south coast victory for Manuel Pellegrini’s men was only a second in 11 top-flight fixtures dating back to September 28.

Saints top scorer Danny Ings almost levelled when he struck the crossbar 20 minutes from time but the hosts rarely looked like building on successive home victories over relegation rivals Watford and Norwich.

Ralph Hasenhuttl’s side remain inside the bottom three, below 17th-placed Aston Villa on goal difference ahead of next weekend’s tasty trip to Villa Park.

Hammers midfielder Declan Rice had the ball in the net inside two minutes but his header from a Robert Snodgrass free-kick was flagged offside.

The visitors, on the back of a desperate run of form which has significantly increased the pressure on Pellegrini, continued their early dominance and Pablo Fornals was unfortunate to see his effort deflect narrowly wide off Saints full-back Cedric Soares.

Southampton were struggling to impose themselves on the game and extremely fortunate not to concede a 25th-minute spot-kick following two tangles in the box at the end of an Aaron Cresswell cross.

Undeterred, West Ham’s positive play was rewarded with an opening goal eight minutes before the break.

Creative Spaniard Fornals nodded down Snodgrass’ cross from the right, allowing Frenchman Haller to scuff a low, left-footed finish in off the right post from level with the penalty spot to claim his fifth goal of the season.

The tactical reshuffle failed to bring greater solidity at the back and Fornals would have increased United’s lead moments after the restart but for a fine stop from Saints goalkeeper Alex McCarthy.

After Southampton midfielder James Ward-Prowse headed over when well-placed, the Hammers then felt aggrieved when Antonio’s powerful drive into the bottom left corner was chalked off.

Antonio, who had a goal disallowed for handball on review in the recent 1-0 success at Chelsea, bundled through challenges from Bednarek and Soares en route to lashing home but his joy was short-lived as video assistant referee Jonathan Moss spotted that he had controlled the ball with his arm.

The reprieve improved a despondent mood around St Mary’s and the hosts nearly equalised with 70 minutes played.

In-form striker Ings, bidding to score for the sixth consecutive game, turned to crash a powerful shot against the underside of the bar, with strike partner Shane Long unable to turn home the rebound.

McCarthy’s strong hands from a close-range Haller header meant the Hammers had to hang on during the nervy closing stages.

And despite a big chance for Pierre-Emile Hojbjerg and an injury concern for keeper David Martin, they returned to London celebrating three important points in the battle for survival.