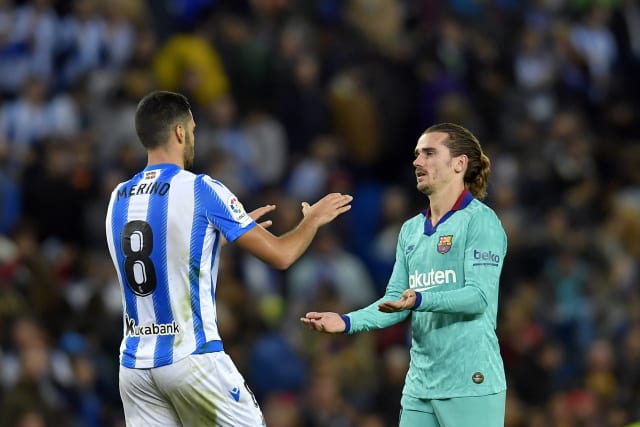 Barcelona’s six-game winning streak in all competitions was brought to an end as they were held to a 2-2 draw at Real Sociedad.

The hosts took an early lead through Mikel Oyarzabal’s penalty, but Antoine Griezmann cancelled that out with a first-half equaliser against his former club.

Luis Suarez struck at the start of the second half to put league leaders Barca ahead, but Alexander Isak replied for Sociedad to ensure the spoils were shared at Anoeta.

Fourth-placed Sociedad attacked from the off, posing an immediate threat when a dangerous cross swung past a static Marc-Andre Ter Stegen and landed just wide of the post.

Barca centre-back Gerard Pique was then called upon to block a second chance just a minute later as the home side gained early momentum.

Ivan Rakitic did reclaim possession for the champions with a hopeful run up the wing, but found no one was on hand to get on the end of his low ball into the area.

The opening goal came in the 12th minute when Barca midfielder Sergio Busquets was deemed to have tugged on the shirt of Diego Llorente as he lunged to covert a corner.

Oyarzabal stepped up to take the resulting penalty, sending Ter Stegen the wrong way to put Sociedad in front.

The Basque side were pegged back before the break, though, by former fan favourite Griezmann.

The French World Cup winner, who left Sociedad for Atletico Madrid in  2014,  was put through by Suarez before coolly dinking his shot over the head of Alex Remiro.

Buoyed by that equaliser, Barca got their noses in front four minutes after half-time when Busquets found Lionel Messi, who unselfishly opted to pass outside to team-mate Suarez despite being one-on-one with Remiro.

Suarez duly tapped the ball into the unguarded net to give the visitors the advantage.

However, Sociedad pulled themselves level 12 minutes later when Ter Stegen could only parry a low cross from Oyarzabal out to Isak, who netted from close range.

The goal was looked at by the video assistant referee before being ratified.

A handful of near misses followed as the final whistle approached, with Mikel Merino missing a close-range header for Sociedad and team-mate Willian Jose also failing to convert an opportunity.

Rakitic had the last roll of the dice for the defending champions, but could only find the side of the netting as his long-range shot landed just wide of the mark.