Solksjaer: United are proud of their academy players 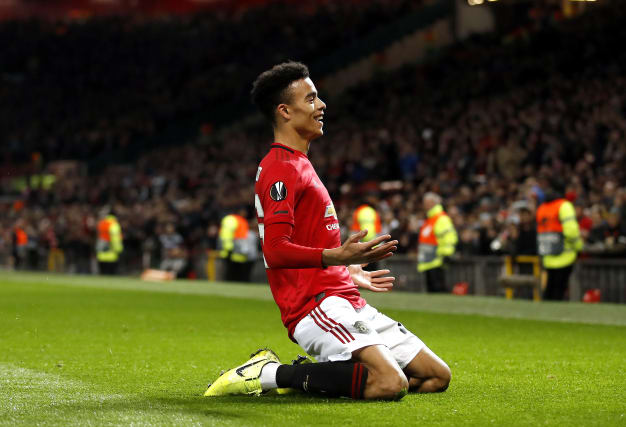 Mason Greenwood’s talent stood out to Ole Gunnar Solskjaer even at the age of seven – an exciting young player that the Manchester United manager says epitomises the academy ahead of this weekend’s milestone.

Sunday’s Premier League encounter against Everton will be the 4,000th consecutive match in which United will have named at least one youth graduate in the matchday squad, stretching all the way back to 1937.

There will be number of academy products involved as the club reaches that landmark at Old Trafford, where Greenwood is sure to be in the squad after his man-of-the-match display against AZ Alkmaar in the Europa League.

The 18-year-old became the youngest ever player to score a brace for the club in European competition on Thursday, when his stunning goals secured a 4-0 victory, top spot in Group L and praise from a long-standing admirer ahead of a historic occasion.

“It’s something we’re proud of, it’s in our DNA,” former United striker Solskjaer said as the 4,000th match approaches. “This club is built on having your own local lads or academy players coming through.

“We pride ourselves on that. You can see today, the academy players know what it means.

“They’re good people, that’s the first thing. They’re great people, everyone that goes through this academy, and they are good players as well.

“They know what it takes to be a Man United player. Mason, for example.

“I actually do remember when I met him for the first time because my son was training at the Cliff as an eight-year-old. Mason was seven.

“The first time I saw him he stood out and I took a picture with him. He’s now here so it’s just what we do.”

Asked if Greenwood had been reminded of that photo or whether he remembered it, Solskjaer said: “His dad, when he mentioned it, and I do remember the kid because I remember talking to (my son) Noah about that.

“So, when he signed his contract we had a little nice memory.”

Solskjaer joked he asked Greenwood for that photo as he “knew he was going to be a player”.

The United boss will have no hesitation throwing him in against Everton this weekend as the sides meet for the first time since April’s chastening 4-0 loss at Goodison Park.

“We lost quite clearly against Everton last year,” Solskjaer said. “We’ve spoke enough about what happened that day and how we looked like a team, it was more or less a shambles.

“But I’ve said too many times this year as well, we’re not that group anymore.

Put to the United boss many of the players are the same, he said: “Yeah, but mentality sometimes is strange to explain. But the mood in the camp is different, definitely.”

Solskjaer castigated his players after that dreadful defeat at Everton, saying that he would be a success at United and there are “players here that won’t be part of that”.

“The group is going in the right direction now, ” he said, having been reminded that Romelu Lukaku is the only player from that day to be permanently sold.

“They’ve got the chance every single day in training, but there won’t be any leeway.

“And it hasn’t been. You don’t play here if you don’t want to go in the same direction as the majority of the group or the whole group, so if you’re the one or two odd men out, you’d probably know.”

Solskjaer certainly appears to be effecting change at Old Trafford, but they key now is building Premier League consistency and momentum following back-to-back wins against Tottenham and Manchester City.

“It’s a vital period for us, of course,” he said ahead of facing Duncan Ferguson’s Toffees. “Home games, we want to get points in.

“I know Everton, they’ve had a big upturn with Big Dunc last week.

“I watched the game. It’s a team that’s going to come here and make it hard for us, but we need to keep carrying on.

“We’re too far behind. We need to keep this momentum going. Last week was good but it’s history now. There’s a next one.”