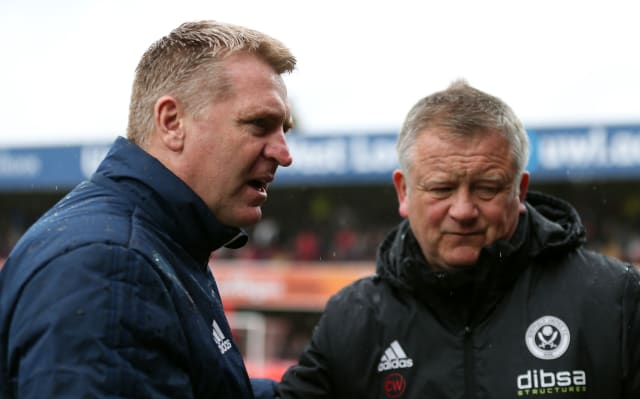 On Saturday, Wilder will come up against a man who shares that burden when his team host Aston Villa, who are managed by lifelong supporter Dean Smith.

The similarities between the Blades and Villa do not end there. As well as their managers, both sides are captained by fans too, in Billy Sharp and Jack Grealish.

The two clubs both won promotion to the Premier League last season and Wilder is looking forward to renewing acquaintances.

“Everyone talks about boyhood fans, but you are under huge pressure and put pressure on yourself to get results,” said Wilder, who has taken the Blades from League One to the top flight since becoming manager in 2016.

“I know Dean well and the work he did at Brentford. I was at the Championship play-off final doing media work and I saw in the reaction afterwards how he felt – Jack too. I looked at their eyes they were shattered with how much work they’d put in.

“I was delighted for Dean and his players. Jack was desperate to get the team into the Premier League. The manner in which they did it was outstanding, club records broken here there and everywhere.

“But it does bring expectation and added pressure. Dean handled it and Grealish’s performances say he’s handled that well too, it’s a huge club in a big city.”

Grealish has been Villa’s star performer so far this season but Wilder insists the talented midfielder is not the only threat in Smith’s side.

“Jack is a fantastic player and the heartbeat of their team, he’s key to them. We will have to defend well and wrap him up,” said the Blades boss.

“But it would be disrespectful to Dean and his team to just look at Grealish. It was a good group that got them out of the division – (John) McGinn, (Conor) Hourihane, they signed (Tyrone) Mings in the summer, they have a good goalkeeper in (Tom) Heaton, there’s (Matt) Targett, they’ve spent money at the top of the pitch, there’s (Jonathan) Kodjia on the bench.

“The talent Villa have got right the way through the team is there to be seen.”

Wilder will hope to have an unchanged squad against Villa on Saturday. He reported “a few tight bodies” following the win at Norwich on Sunday but stopped short of revealing any new injury issues.

Mo Besic caught the eye at Carrow Road and his performance from the bench could see the on-loan Everton midfielder come into Wilder’s thinking for a starting place.