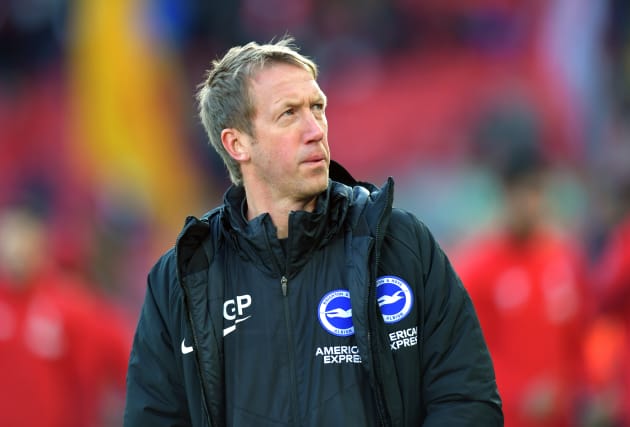 Brighton boss Graham Potter receives daily reminders of the significance of games against Crystal Palace and is braced for a “hostile atmosphere” at Selhurst Park.

Potter is preparing for his first experience of a derby match against the Seagulls’ fiercest rivals.

Albion did the double over Palace under former manager Chris Hughton last season and will move above them on goal difference with another victory in south-east London on Monday evening.

“I have been reminded of how important it is pretty much every day,” said Potter.

“It’s always good these games, they’re important for our supporters and it’s important because of the proximity of the two teams and the clubs.

“My memory of Selhurst Park is always lively, so Monday night with the Sky cameras there, it will be a good atmosphere, hostile atmosphere, it’s something we are going to have to deal with, and we’ve got to look forward to it.

“I was at a function last night and everybody’s just speaking about the game and ‘make sure you win’. That type of rhetoric.

Brighton sit 12th in the table after recovering from three successive losses to take four points from tough games against Arsenal and Wolves.

Opponents Palace are three points and two places better off and will be led by manager Roy Hodgson for the 100th match.

Former Ostersund coach Potter, who – like Hodgson – began his managerial career in Sweden, holds his opposite number in extremely high regard.

“As soon as I went over to Sweden, I understood his influence in Swedish football and the respect everybody has of him is incredibly, and rightly so,” said Potter.

“The more I understood about his career, the more I respected him because he’s been all over Europe.

“He’s made a fantastic career in terms of where he’s been and the clubs he’s been at and the experiences he’s had.

“I think he’s an example for every young coach in terms of how he’s built and sustained a career in the game.”

Brighton will assess striker Aaron Connolly’s groin issue ahead of the game, but Solly March remains out with a similar problem, while midfielder Dale Stephens serves a one-match ban.