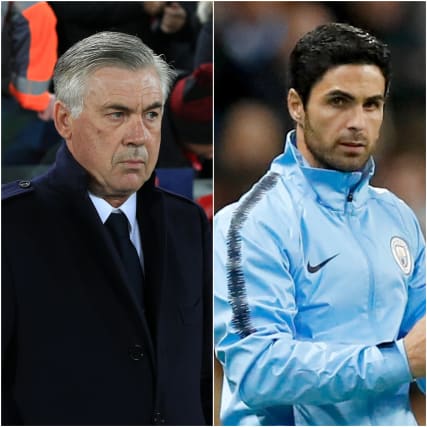 Arsenal are reportedly joining Everton in the race for manager Carlo Ancelotti following his dismissal by Napoli on Tuesday. The Daily Mail says both Premier League clubs are keen to meet with the three-time Champions League winning boss, however some concerns remain around the circumstances of the 60-year-old’s departure from his former club and whether or not his services would come with a compensation fee.

Another man linked to the Arsenal top job is former player Mikel Arteta. The Manchester City assistant coach is reportedly eager to become the Gunners boss but has concerns over the long-term plans in north London. According to The Sun, the 37-year-old has also been touted as a future replacement for current City manager Pep Guardiola and is “conflicted because of his relationship with Pep and feeling for City after the years there”.

While Arteta is eager to get his hands on a top job in the Premier League, interim Everton manager Duncan Ferguson has no plans to take over the role full time. The Liverpool Echo reports that the 47-year-old, who took over from Marco Silva last week, has made it clear to the club that he has no intention of becoming the permanent boss and is not under consideration for the role.

After qualifying for the knockout stages of the Champions League, Chelsea boss Frank Lampard is keen on boosting his side’s attack during the January transfer window. The club is eyeing Crystal Palace and Ivory Coast winger Wilfried Zaha, 27, to help add some strike power up front, the Daily Mirror reports.

However Zaha is not the only player on Chelsea’s radar, with the club sending multiple scouts to Tuesday’s Champions League clash between Lyon and RB Leipzig. According to the Daily Mail, Chelsea were eager to get a closer look at Lyon striker Moussa Dembele and Leipzig forward Timo Werner, who they view as potential transfer targets next month.

Kai Havertz: The 20-year-old Bayer Leverkusen playmaker is a leading transfer target for Manchester United but also on the the radar of Barcelona, Liverpool, Real Madrid and Bayern Munich, Bild reports.

Emerson Palmieri: Juventus are looking to purchase the Italy defender from Chelsea next summer, according to Tuttosport.

Olivier Giroud: The 33-year-old Chelsea forward is preparing to leave the club in the new year with Inter Milan and Atletico Madrid among the leading contenders to secure his signature, Football.London reports.