Can anyone stop Van Gerwen? 5 talking points ahead of the PDC World Championship 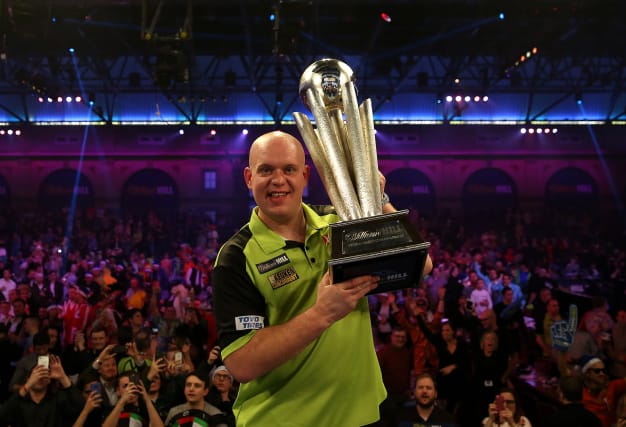 The PDC World Championship starts at Alexandra Palace on Friday.

Michael Van Gerwen is in action on the opening night as he attempts to defend his title for the first time.

Here, the PA news agency takes a look at some of the talking points from the tournament.

Despite winning three world titles, the Dutchman has never succeeded in securing two in a row. The 30-year-old has suffered semi-final exits in his previous two defences, but he is the overwhelming favourite to go all the way this time around. Van Gerwen has enjoyed another stellar year on the circuit, winning seven televised tournaments in 2019 to take his career tally to 50.

Who could shock Van Gerwen?

Third seed Gerwyn Price appears to be Van Gerwen’s biggest threat, given the Welshman is in the form of his life. The former rugby player recently finished runner-up in the European Championship and Players Championship, either side of defending his Grand Slam of Darts title in Wolverhampton. But Price does not have a great record in this tournament, with last year’s runner-up Michael Smith, Peter Wright and ex-world champion Rob Cross all likely to be strong contenders.

Will Barney go out with a bang?

Raymond Van Barneveld will retire from darts after his campaign at Ally Pally comes to an end. The 52-year-old Dutchman is a five-time world champion, but has struggled to live up to those heights in recent years. Looking at his draw, he is unlikely to enjoy a fairytale finish. If he gets past Darin Young, up-and-coming compatriot Jeffrey De Zwaan is waiting in round two, where he crashed out last year, with Cross, Wright and Dave Chisnall also in his section.

Suzuki or Sherrock to spring a shock?

With Lisa Ashton and Anastasia Dobromyslova failing to qualify for Ally Pally this time, Mikuru Suzuki and Fallon Sherrock will make their debuts at Alexandra Palace. Japan’s Suzuki showed she has the potential to upset James Richardson with her displays in the Grand Slam of Darts last month, but England’s Sherrock faces a tough test against the emerging Ted Evetts.

Will anyone hit two nine-darters?

Van Gerwen was unhappy there was no extra prize money on offer when he hit the only televised nine-darter of 2019 at the Players Championship last month. The PDC has introduced a bonus for this year’s World Championship, but players will only take home the £100,000 pot if they make history and hit two perfect legs. There have been 47 nine-darters this year but, given Van Gerwen is the only player to do so in front of the television cameras, it is unlikely.