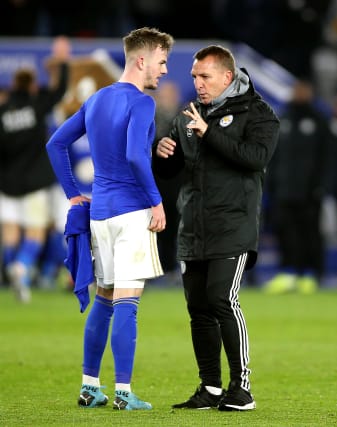 Leicester manager Brendan Rodgers has ruled out any departures during the January transfer window as he looks to keep pace at the top of the Premier League.

The Foxes host struggling Norwich on Saturday aiming to stay within striking distance of leaders Liverpool, who are heading off for the FIFA Club World Cup in Qatar.

The likes of England duo Ben Chilwell and James Maddison along with midfielder Wilfried Ndidi have all been touted as potential targets for rival clubs at the start of 2020.

Rodgers, though, maintains there are no thoughts of allowing any departures.

“There will be nobody leaving in January, categorically,” the Leicester manager said.

“I am speaking regularly with (director of football) Jon (Rudkin) and Top (owner Aiyawatt Srivaddhanaprabha).

“It is really clear, we want to keep this squad together. It is an exciting team with growth and development in it, so we want to ensure they stay around beyond January.”

Rodgers added: “It’s the nature of the game that when you are doing well there will always be speculation around you, (players like) James and one or two of the other boys, they understand that.

“But long may it continue because he (Maddison) has been absolutely brilliant and started the season very well.

“James is a bright young player with a big future. He had a great spell at Norwich, they had to sell him I understand because the club needed the money, and has continued to flourish here.

“He is very hungry to be better and that is what is key. He has been consistently very good and he has a great hunger for the game.”

Rodgers indicated Leicester would look to strengthen the squad if the right opportunity presented itself.

“We have got a top squad and want to continue to improve, that is very important, but there has to be the availability and someone who is affordable for us,” he said.

Despite having chalked up eight straight Premier League wins, Rodgers is not expecting an easy ride against a Norwich side battling for points at the other end of the table.

“Win our next game, that’s always been our mantra, to never look too far ahead,” the Leicester manager said.

“It’s hard to forecast in football and all you can do is bring your best game into the game.

“Of course, Norwich are sitting at the wrong end of the table and they don’t want to be there, but they’ve shown they can win, so we have to prepare for them and a tough game.”

Although in charge for just 10 months, Rodgers had been rewarded with a new contract until 2025.

“The staff who came in with me had been with me for a long time, so it was important after I agreed that they were the same, so that is all done,” he said.