Tierney set for three months out with dislocated shoulder 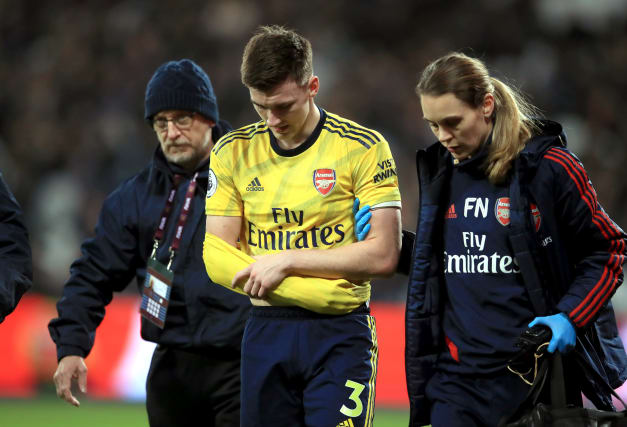 Arsenal could be without Kieran Tierney for up to three months after he suffered a dislocated shoulder in Monday’s win over West Ham, the PA news agency understands.

Tierney, 22, fell awkwardly during the 3-1 victory at the London Stadium and was replaced just before the half-hour mark.

He was later seen leaving the stadium with a supportive strap and the club confirmed on Wednesday that he had suffered a dislocation to his right shoulder.

No official time frame has been put on his recovery and PA understands it has not yet been decided whether the Scotland international will undergo surgery, but it is feared he could be sidelined until March.

Tierney joined Arsenal from Celtic in the summer but did not make his debut until late September due to a niggling groin problem.

The win at West Ham saw the Gunners end a nine-match run without a victory but a number of players suffered knocks ahead of Thursday’s Europa League trip to Standard Liege and the weekend Premier League visit of Manchester City.

Hector Bellerin was withdrawn from the line-up ahead of kick-off with a tight hamstring and will not travel to Belgium, with his place against City also in doubt.

Granit Xhaka suffered concussion after being struck by the ball and is definitely absent for both games.

Meanwhile, club-record signing Nicolas Pepe scored and provided an assist against the Hammers but a bruised knee means he could miss Sunday’s game having already been ruled out of the Liege clash.

Dani Ceballos remains sidelined with a hamstring issue and Arsenal also confirmed Rob Holding would be absent for around two weeks as he recovers from a minor knee complaint.