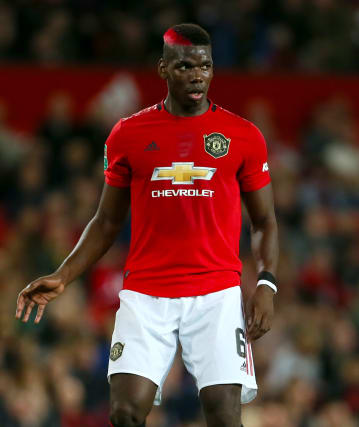 Paul Pogba’s long absence will continue when Manchester United face AZ Alkmaar in the Europa League, but Ole Gunnar Solskjaer expects the midfielder to play a big part in the second half of the season.

The 26-year-old has managed just six appearances since fuelling speculation about his future over the summer by admitting his openness to an Old Trafford exit amid interest from Real Madrid.

Injured against Southampton at the end of August, Pogba returned for the matches with Rochdale and Arsenal in September but has not been seen since due to an ankle injury.

The World Cup winner returned to Manchester a fortnight ago after a period of rehabilitation in Miami, but the France international still remains unable to feature as United prepare to face AZ on Thursday.

Asked if it is an automatic decision to put Pogba back in the starting line-up given the way Scott McTominay and Fred have kicked on, the United boss said: “Let’s get Paul fit first and then back in form and Paul will play loads of games.

“You know, for me, he’s one of the best players in the world and we’re looking forward to having him back.”

Pogba looks set to be joined on the sidelines by Jesse Lingard, who missed training on the eve of the match having picked up a knock against Manchester City.

The 26-year-old impressed in Saturday’s thrilling 2-1 win at the Etihad Stadium, which came just days after Jose Mourinho’s Tottenham were beaten by the same scoreline.

Those victories were a tantalising glimpse at what Solskjaer’s side are capable of, while it underlined the importance of consistency having drawn their previous two league matches against promoted sides Sheffield United and Aston Villa.

“Of course consistency is vital in football if you’re going to win trophies,” Solskjaer said.

“And this young team, they need to learn how to put performances on when maybe they don’t feel like it, maybe don’t feel great.

“We’ve had some games this year where we’ve not been able to perform as well as we’d like, but that’s a learning curve and with young boys I am sure in the next couple of years they’ll improve that as well – and hopefully the rest of the season.

“Because we’ve come through a sticky patch with bad injuries and bad results, and we’re looking brighter now.”

There is an understandably positive mood around the camp following United’s recent results, with the team bonding at their Christmas party at Winter Wonderland.

“Inside we’ve always had belief what we’re doing is the right thing,” Solskjaer said of the upturn in results.

“It might change the perception on the outside but results… you can’t control that. Of course it could’ve been two draws, 4-0 wins, that’s just the nature of football.

“Sometimes you’ve got the margins on your side and I think the decision we made by sending a young team to Kazakhstan and Astana made the players that stayed here have more energy and be really ready for this week because it was a hard week.”

United were able to send such an inexperienced squad on that 6,000-mile round trip as they had sealed progress to the Europa League knockout phase with two matches to spare.

But the 2-1 loss in freezing Kazakhstan means top spot in Group L is up for grabs on Thursday, when already qualified AZ will be looking for a victory that would leapfrog United.

“Of course I’m bothered (about winning the group),” Solskjaer added. “I’m not going to send these boys out and say, ‘I don’t care if you win or lose’.

“Every time you play for Man United is a game that you have a chance to prove yourself, to team-mates, to me, to the supporters that you deserve to be part of this team for a long time.”