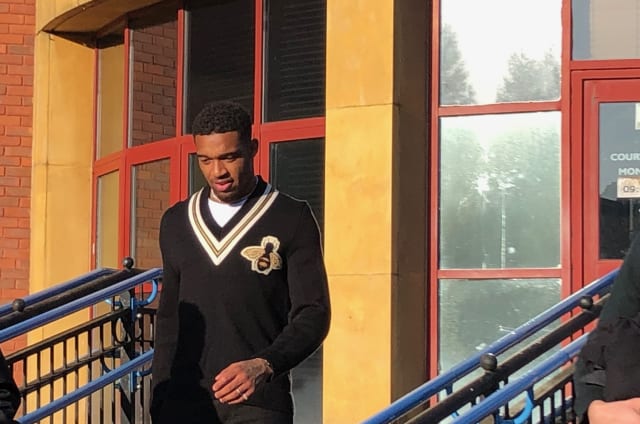 Premier League football player Jordon Ibe will face trial for allegedly driving away after crashing his Bentley into a coffee shop this summer.

The Bournemouth winger, 23, is accused of driving off after ploughing into The Pantry on Plaistow Lane in Bromley, south London, in the early hours of July 30.

The shop was so badly damaged the entire shop front had to be removed from its foundations to render it safe.

A Mercedes parked in front of the shop also suffered minor damage.

The player appeared at Bromley Magistrates’ Court, where he denied failing to stop at the scene of an accident.

He did not enter his pleas to a second charge of driving without due care and attention.

Ibe, who signed for Bournemouth from Liverpool in 2016 for a reported £15 million fee, was charged by postal requisition on October 29.

Prosecutor George Crivelli said the white Bentley Bentayga 4×4 had remained at the scene for just a few minutes before reversing and driving off after the crash at around 4.50am.

Mr Crivelli said: “The defendant has been involved in a collision – his vehicle has left the road, collided with a parked car and crashed into a shop front.

“The vehicle remained for a short period before driving off.”

The prosecutor said no person had left any details or made themselves known to police.

Ibe’s car also suffered significant damage, with part of it left in the rubble of the shop front, the court heard.

Jonathan Morrissey, for Ibe, said the player claims he waited for a reasonable length of time and nobody made themselves available to exchange details.

Listing the case for trial on February 10 at Bexley Magistrates’ Court, magistrate Philip Widdowson said: “If you fail to attend, you could be committing an offence for which you could be arrested, fined or sent to prison.

“If you commit a sentence while on bail your sentence will be greater.”

Ibe, of Poole, Dorset, was accompanied to court by a friend.