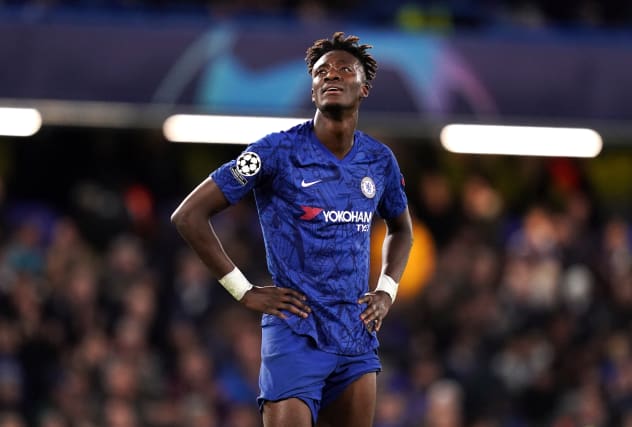 Tammy Abraham has declared Chelsea “ready for anyone” in the Champions League’s last 16.

Abraham notched his 13th Chelsea goal in all competitions this term in Tuesday’s 2-1 win over Lille which secured the Blues’ progression from Group H.

And the 22-year-old England striker insists Frank Lampard’s developing side will not fear any opponents in the knockout stages of Europe’s top competition.

“This is exciting, very exciting – for us, we’re never ones to back down from a challenge,” said Abraham.

“We’re ready for anyone. I would love it if it is playing at the Nou Camp or somewhere I’ve never played before.

“From our first game in the competition we realised how big it was.

“It’s a massive achievement for us to be through to the last 16.

“And it means the world to me, it’s a dream come true to have watched the Champions League as a young kid growing up and now to be playing in it myself.

“But now it’s also about knuckling down and focusing on the Premier League until the new year.”

A 2-2 draw at Valencia last month left the Blues seeking victory over Lille to guarantee progression to the last 16 and Abraham and captain Cesar Azpilicueta bagged the goals to seal the deal.

Last term’s semi-finalists Ajax were dumped out of the competition courtesy of a shock 1-0 loss at home to Valencia, underlining the strength of Chelsea’s achievement in reaching the next round.

Abraham tapped home to cap an impressive five-man move to open the scoring, leaving the Chelsea academy graduate delighted by his side’s ability with the ball.

N’Golo Kante chested down Mateo Kovacic’s raking pass for Christian Pulisic to feed Willian out wide. And the Brazil forward then cut back from the byline for Abraham to tap home at the near post.

Abraham admitted Lampard has added a level of fluidity to Chelsea’s attacking play that will give opponents pause for thought.

Asked if the build-up to his goal points Chelsea’s way forward under Lampard, Abraham replied: “Yes, definitely. For us, that wasn’t even our best performance.

“But that goal just goes to show the class we have in our team and we have to do more of it.

“It’s always nice to have players who can play in different positions and can fill different roles for the team.

“We had one job to do, and that was to get the three points. And that’s what we did.

“The experienced players really stepped up today and that’s exactly what we needed.”