Frank Lampard calls on Chelsea to step it up 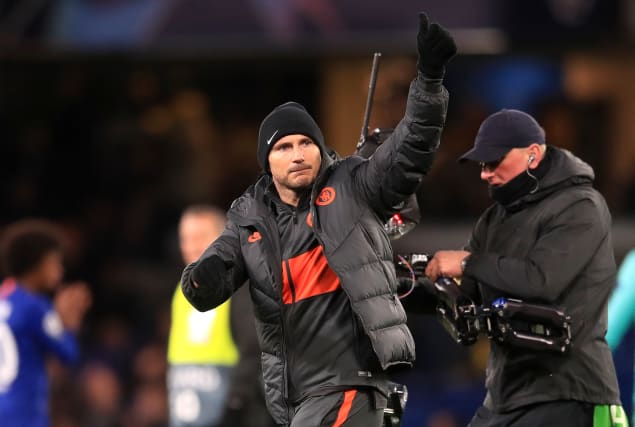 Frank Lampard has urged his young Chelsea side to improve after securing progression to the Champions League knock-out stages with a 2-1 win over Lille.

Goals from Tammy Abraham and Cesar Azpilicueta put the Blues in control at half-time, but they failed to kill off the Group H tie.

When former player Loic Remy lashed home with 12 minutes left, it set up a nervy finale at Stamford Bridge, especially with Valencia winning at Ajax.

Another Lille goal would have seen Chelsea drop from second to third, but they held on and reached the round of 16.

“I thought the first half was good and the first 20 minutes of the second half we were particularly good, but we need to take more of our chances and that is a fact because you leave teams slightly in the game,” Lampard said.

“They had probably two shots at the back end of the game and one goes in, so that was a frustrating thing in what was a very good performance.

“We are in the next stage and I think that is a really good achievement for the group, but we know once you get to the next stage how cut throat it will be.

“Looking at the opposition we will be up against, we can’t afford to miss chances or give chances away.”

If Chelsea continue to lack a clinical edge, Lampard could dip into the transfer window next month now the club’s transfer ban has been lifted.

But he insisted he was happy with his group of players, adding: “I’m calm about this window. I know what the squad is.

“We feel very together in the dressing room. We are improving and even the little bumps during the last two weeks are part of the process and we don’t see so much in January that you can do great business.

“If it is there to be done and it feels like it is right for the club that is a conversation for me and upstairs, but I am very calm with January.

“I believe in what we’ve got now and I don’t think we will be crazy just because the transfer ban has been lifted. I think we just need to keep working.”

Lille boss Christophe Galtier was left with mixed emotions, after watching his side threaten to spoil the party in west London when Remy netted against his old club in the 78th minute.

“Chelsea were playing to go through and they are used to playing such big games,” he said.

“The first 25 minutes, the weather made it complicated and Chelsea were pressing a lot, but our players hung on and in the last 20 minutes Chelsea diminished the intensity and we had the opportunity to create some chances and get a goal back.

“This enabled us to have a more interesting end to the game and we also had the opportunity to score a second towards the end. Could we have got more out of this game? I think we probably could have given our efforts.”