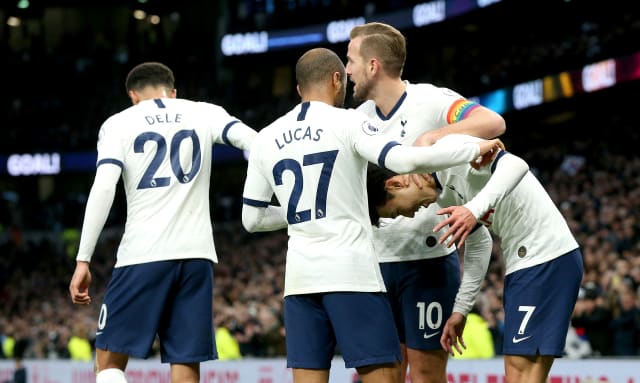 Son Heung-min almost spurned the length-of-the-field break that brought him an early contender for goal of the season against Burnley.

The forward has revealed he was looking to feed Dele Alli before instead setting off on a box-to-box counter-attack.

Son bisected a stunned Burnley at full pace before steadying himself for a fine goal, delighting boss Jose Mourinho and the rest of the Tottenham Hotspur Stadium.

The 27-year-old admitted he had to ask himself whether to launch the break that would yield a goal he will now never forget.

“I saw Dele (Alli) running on the left side, and many Burnley players,” said Son.

“I tried to pass first of all to Dele, because he was open but then one of their players followed him so he wasn’t open any more.

“Then I was just thinking ‘should I go?’, and I put my booster on. I took the right timing to the booster on.

“Then in two or three seconds I was in front of the goal and I was really, really surprised. This kind of goal, especially at home, it makes me so proud and happy. It’s amazing.”

Harry Kane fired a brace with Lucas Moura and Moussa Sissoko both on target too, but it was Son’s stunning goal that hogged all the plaudits.

The ever-humble Son conceded he even had time to fear failing to cap such a sensational break with a goal, as he set himself to fire past Burnley keeper Nick Pope.

“But I was still focused for the finish, I wanted to finish with this action. Imagine doing so well and then you miss the goal, I’d have been so upset.

“So I just tried to focus and finish well, and I’m really, really happy to finish it. For me it’s difficult, but every single goal is special.

“I like to dribble, I like to score goals, so this kind of goal is really, really special. So I’m just grateful for a special feeling like this.”

Mourinho revelled in his side’s comprehensive victory, especially the constraining tactics that hemmed Burnley into their own half.

Kane proved vital to the victory, but Mourinho admitted he will rest his skipper in Wednesday’s Champions League clash with Bayern Munich.

Spurs will qualify from the group stages whatever result they claim in Germany, with Mourinho pondering further changes.

He said: “I can say that Harry Kane will not play, but who will play, I need to think.”

Burnley will host Newcastle on Saturday itching to return to winning ways after three straight defeats and leaking 11 goals.

“The group always stays together no matter the result because it’s an honest group and an honest manager,” Pieters told Burnley’s official club website.

“After three losses we have to make sure we are ready (for Newcastle) and I have no doubt we will be.”