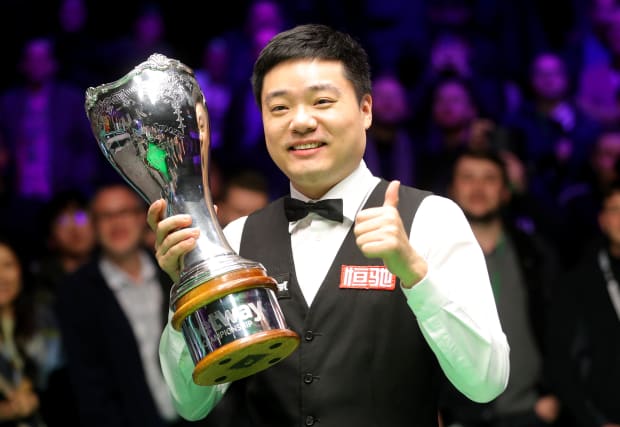 Ding Junhui beat Stephen Maguire 10-6 to win the UK Championship title at the York Barbican, 10 years after he last won the tournament.

The 32-year-old from China, ranked 16th in the world, joined an elite group of players to win the event three times after his previous successes in 2005 and 2009.

Scotland’s Maguire, 38, two places higher in the rankings, fell short of winning the UK title for a second time after his triumph in 2004, despite contributing with three of seven centuries made in a high-class final.

Ding, who made back-to-back centuries as he cruised into a 4-0 lead in the afternoon, led 8-4 in the evening session before Maguire made successive scores of 103 and 124 to pull it back to 8-6.

It was the Scot’s third century in four frames, but Ding held his nerve to respond in emphatic fashion when the pressure was on to go 9-6 up with a break of 131 and then completed his victory to a standing ovation with his fourth ton of the final.

The Chinese secured his fourth major title, eight years after his third, to pocket a winner’s cheque of £200,000, while Maguire, who lost to Ronnie O’Sullivan in the 2007 final, was rewarded with £80,000.

Maguire struggled to get going as Ding won the first two frames in the afternoon session and then took control with successive centuries in the next two.

Maguire stopped the rot in the fifth frame and won the next three to trail 4-3 before Ding ensured a 5-3 lead for the evening session with a score of 66.

But Ding hit back with a brilliant 131 to go 9-6 up and kept his foot on the pedal with another century in the 16th frame to secure victory.

The seven centuries both players shared in the final ensured a new UK Championship record with 139 scored in total throughout this year’s tournament.