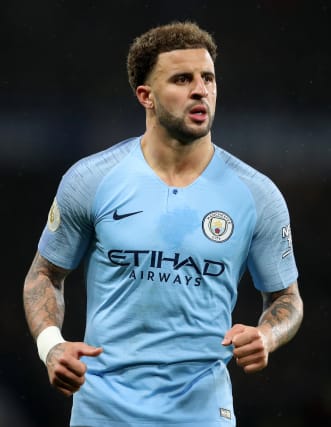 Kyle Walker insists Manchester City are not ready to surrender their title despite another damaging defeat.

The champions fell 14 points behind Premier League leaders Liverpool as they were beaten 2-1 by their great rivals Manchester United in Saturday’s derby at the Etihad Stadium.

In a match overshadowed by ugly scenes in the stands, including an alleged racist gesture from a City supporter towards United players and the throwing of missiles, the hosts paid the price for first-half sloppiness.

United continually cut City open in a series of incisive counter-attacks, with a penalty from Marcus Rashford and another strike from Anthony Martial being the least they deserved.

City did pull one back through Nicolas Otamendi late on but they could not force an equaliser, condeming them to a fourth defeat of the season and further shredding their title hopes.

Right-back Walker said: “We knew they had quick players in quick areas – Martial, Rashford and (Daniel) James. They are very good on the counter-attack. We knew that but we didn’t handle it as well as we could have.

“It’s a massive gap, we know that, but we need to keep fighting until the end. It’s not over until it’s over. We will keep trying, as a team.”

After just 16 games, City, who have also drawn twice, have now dropped as many points as they did in the whole of last season. They would have to win all their remaining 22 games to match last season’s final points tally of 98.

City also dropped points when they were held to a draw by Newcastle last weekend but they hoped to have turned the corner after a convincing 4-1 win at Burnley in midweek.

But once again, despite looking confident in attack with Raheem Sterling and Kevin De Bruyne driving them forward, their back-line was exposed too often.

The continued deployment of Fernandinho in defence, meaning his presence in midfield is missed, continues to divide opinion, despite the Brazilian’s general competence at centre-half. They also lacked a cutting edge with Sergio Aguero again out injured.

Midfielder Rodri said: “They defended really well and we weren’t aggressive enough with the ball. We need to be more clinical, score more goals.

“We created lots of chances but we didn’t manage to put the ball in. We played the way we wanted but it’s always difficult when you concede two goals.

“You need to find spaces but at the same time you concede more spaces to them for their counter-attacks.

“It’s very difficult to attack when they put 11 players behind the ball but we shouldn’t have conceded those two goals.

“It’s a big gap but my mentality has always been never give up, never. We will play and we will fight until the end.”