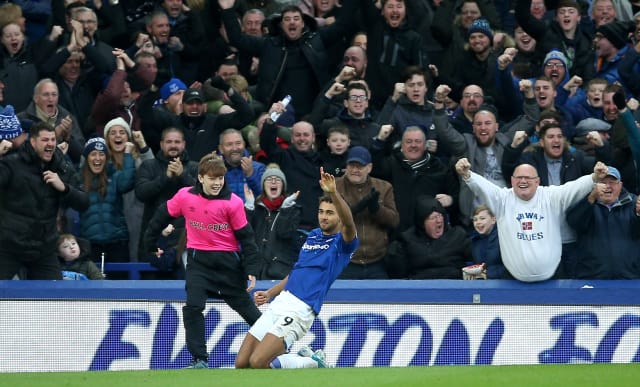 Everton striker Dominic Calvert-Lewin wants to earn the right to call the number nine shirt his own – with a little help from the man who wore it to such great effect in the late 1980s.

That man is Duncan Ferguson and now as caretaker manager he will have taken great satisfaction from the 22-year-old’s two goals in the 3-1 win over Chelsea.

The Sheffield-born forward has always been a hard-working willing runner but the currency with which he is judged has always been in short supply and it is an area he knows he has to improve on.

Calvert-Lewin has never scored more than eight club goals in a season but his double – his first since playing for Northampton against Carlisle in League Two in October 2015 – took his tally to seven for the current campaign.

And some encouraging words from Ferguson have clearly helped.

“It is a big number and comes with big responsibility,” said the Calvert-Lewin on his decision to request the number nine shirt this season.

“For me it is a privilege to wear the number nine and I want to repay the club for putting the faith in me and giving me the number.

“I asked for the number and it means a lot, I want to lead the line like I did in this game.

“I’m confident that I am capable of putting in performances that warrant wearing the number nine. To top it off with two goals I’m over the moon.

“I’ve got a good relationship with Dunc. I’ve worked alongside him for three years now, since I started training with the first team and he’s always backed me and worked closely with me to help my game.

“To have him on the touchline, it was important that I repaid him with my performance. To celebrate with him was a special moment.”

On the advice he received from the caretaker boss before kick-off Calvert-Lewin added: “He just said ‘Work as hard as you can and play free. Enjoy the game’.

“The system (4-4-2) we played was slightly different. Richy (Richarlison) and me up top is something we haven’t done before but it paid off.

“We both have legs, we can both be physical on our day and it gelled. Credit to Dunc for changing it up and going for that.”