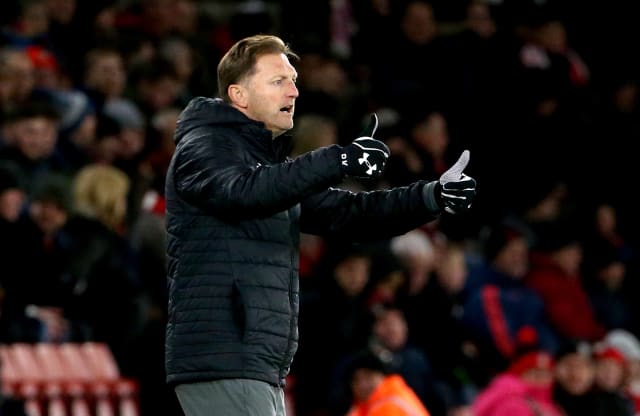 The Saints travel to Newcastle on Sunday looking to extend a three-match unbeaten run which has seen back-to-back home wins over fellow strugglers Watford and Norwich.

The upturn in fortunes following the international break started with a battling 2-2 draw at Arsenal – which could have seen them leave with all three points but for a stoppage-time equaliser.

“It is good that we have built up a little bit of self confidence, so we can go there (Newcastle) and try to take something,” said the Austrian, who arrived in early December last year to guide the club to safety.

“I spoke about fighting back, finding our trigger and identity. I think this was the most important thing in the last three games.

“We could have won against Arsenal, and the last two games we have won. It was a completely different performance from everybody.

“The team was playing much more committed and the way we acted was a very, very intense one and this is our identity.

“We must hold this high always, because when we play like this, we create chances, we don’t give up so many chances.

“We are defending higher and keeping the opponent far away from our goal. This is more the style we want to play.

“Because of the (bad) results, we had stepped deeper and deeper (back).

“Now we try to push to reset button during the international break and come back to what we want to do better.

“It looks like, as the results show, that this is the right way.”

After holding off a second-half fightback from Norwich to win 2-1, Hasenhuttl knows his side must be prepared for another test of their progression at St James’ Park.

“I expect a game with a very good organised opponent,” Hasenhuttl said at a press conference reported on Southampton’s website.

“They don’t have a lot of possession, but they defend very well. They have a lot of counter attacks, where they are very strong, so not an easy team to play against.

“This will be a different game, with different tactical options, so let’s find a good game plan to take something.”