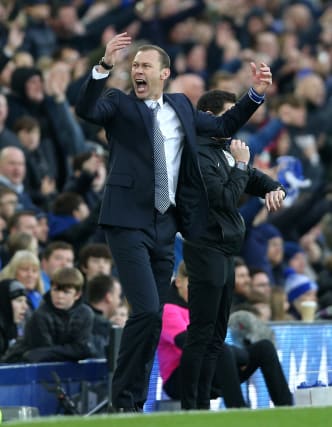 Everton caretaker manager Duncan Ferguson admits there were tears both during and after an emotional 3-1 win over Chelsea at Goodison Park.

The former Toffees striker has been handed his dream job following the sacking of Marco Silva and he got off to the perfect start by lifting the club out of the bottom three.

Richarlison’s fifth-minute header had the Scot charging down the touchline celebrating with ball boys, a scene replicated when Dominic Calvert-Lewin scored his second of the game six minutes from time after Mateo Kovacic’s first Premier League goal had briefly made it 2-1.

Ferguson said he was in tears after seeing the kids were in tears and there were more waterworks in the boardroom afterwards when he met his wife and children.

“It was just relief, excitement, but you still know there is a long way to go in the game so you’re not getting too carried away – although it didn’t feel like that at the time,” he said of his reaction to the first goal.

“I’d have hugged the linesman if he was there. It is just emotion, just such adrenaline. When you see the kids’ faces, I think one of them was in tears and I was in tears to be honest.

“It was an incredible feeling. I’ve scored goals for this club, I’ve been involved in finals but that was incredible – not the goal but getting the points. It is difficult to describe.

“I’ve popped into the boardroom to see them (his family) and they were obviously delighted. Plenty of tears.”

Ferguson, who said he is not yet ready to take the job permanently, claimed he did not know why former Bayern Munich manager Niko Kovac was sat in the directors’ box.

“Haven’t a clue. I am sure he enjoyed the game,” added the former Scotland international, who strode onto the pitch, tie askew, at the final whistle to whip up the crowd and high-five or hug any fan in touching distance as he walked off.

“Whoever it is (the new manager) they are coming to a fantastic football club when fans create an atmosphere like that.”

On whether he could reconsider being more than an interim boss he added: “I don’t know if I can go through this again – I need to get my fitness up that’s for sure the way I was running up and down the touchline!

“It was the one game, I’m made up, delighted for the fans. Three points is massive for us.”

Chelsea boss Frank Lampard was frustrated at the sloppiness which saw them concede three times.

“Yeah, all the goals I think. The first was something we were aware of, Richarlison in the air and the other two were really poor defending,” he said.

“We can’t give away the ridiculous (third) goal we gave away.

“They were direct and we had to deal with that and we didn’t deal with it well enough.”