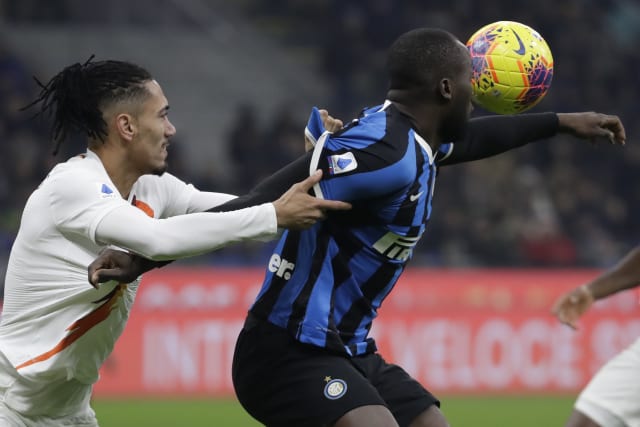 Romelu Lukaku and Serie A leading Inter Milan were held to a goalless draw by Chris Smalling’s Roma on Friday, allowing Juventus a chance to retake top spot this weekend.

The build-up to the San Siro showdown was overshadowed by a controversial front page on Italian daily Corriere dello Sport on Thursday.

The newspaper was accused of fuelling racism after running the headline ‘Black Friday’ alongside pictures of Inter’s Lukaku and Roma’s Smalling.

The cover attracted widespread criticism, with on-loan Roma defender Smalling describing it as “wrong and highly insensitive” while his former Manchester United team-mate Lukaku called it the “dumbest of headlines”.

The pair both started Friday’s encounter, where Lukaku came close to netting early on with a shot that Roma goalkeeper Antonio Mirante parried away.

Neither side could find the breakthrough though as Inter saw their five-match winning streak in Serie A come to an end. They are now two points clear of reigning champions Juve, while Roma climbed up to fourth.

In LaLiga, Villarreal held Atletico Madrid to a goalless draw at the Estadio de la Ceramica.

Joao Felix had the best of Atletico’s chances as they recorded their eighth draw of the league season, with only 16 matches gone.

Diego Simeone’s side are now five points behind joint leaders Barcelona and Real Madrid, with both yet to play this weekend.

In the Bundesliga, Eintracht Frankfurt came from two goals behind to force a 2-2 draw with Hertha Berlin.

Goals from Dodi Lukebakio and Marko Grujic had seemingly put Hertha on course for their first win since October 4.

Frankfurt fought back, however, with Martin Hinteregger’s strike reducing the deficit before Sebastian Rode struck the equaliser in the 86th minute.

In Ligue 1, Lyon stormed to a 4-0 win over Nimes, who had to play for more than 50 minutes with nine men.

Theo Valls was sent off in the fifth minute to leave Nimes struggling, and matters got worse for the home side when Memphis Depay converted from the spot in the 16th minute.

Nimes managed to contain Lyon for the rest of the first half, but Gaetan Paquiez was sent off in the 40th minute and the visitors took full advantage after the break with further goals from Depay, Houssem Aouar and Joachim Andersen.

In Friday’s other Ligue 1 match, a Victor Osimhen goal gave Lille all three points in a 1-0 win over Brest.