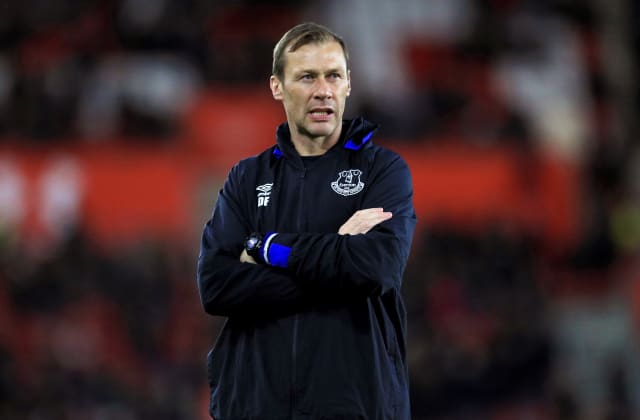 Everton caretaker manager Duncan Ferguson admits it is not realistic for him to take over permanently at this stage despite it being his dream job.

The former Toffees striker, a member of the first-team coaching staff since 2014, accepts he is not experienced enough to take charge of a side in the bottom three after just two wins in 11 matches – a run of results which saw Marco Silva sacked on Thursday.

He plans to make the most of the time he has leading the team, starting with Chelsea at Goodison Park.

“I am a coach at the moment so I don’t think that is something I am really considering at this moment in time,” he said.

“They (the club) told me the manager had lost his job and they wanted me to step in. Of course I never hesitated.

“I think the club will find a really top manager to come to the club.

“Of course it is a dream of mine to be the Everton manager but let’s be realistic and my main focus is tomorrow. That is all my remit is, to get a result tomorrow.”

The likes of former boss David Moyes, Vitor Pereira, Carlo Ancelotti and Eddie Howe have all been linked with the vacancy and Ferguson is confident the club will get a top manager having gone through Roberto Martinez, Ronald Koeman, Sam Allardyce and Silva since Moyes left in 2013.

He had some sympathy for his predecessor, however.

“It is not nice when a manager loses his job, we all felt for him,” he added.

“Everyone at the club supported him as best we could. It is unfortunate he lost his job but results determine that don’t they?

“No-one likes to see the manager lose their job – me included – but there was a mixed feeling.

“This is a fantastic club. Who wouldn’t want to be Everton manager? I’m sure there will be many, many top managers up for this job.

“The situation is what it is. I don’t know how bad it is being made out to be but we are in the bottom three and there is no hiding from that fact.

“But we have plenty of time in the league, plenty of games ahead of us. The games come thick and fast so we just have to crack on and start picking up some points.

“They are not many points off mid-table so if we can string a few results together I am sure we can start climbing the table.”

Ferguson will hope to take some inspiration from Frank Lampard, another player-turned-manager, who has impressed in his first season at Stamford Bridge.

“He’s doing a very good job isn’t he? Has he got any tips?” joked the former Scotland international.

“We need to move on, unfortunately. That is football. We need to look to the next game as we are desperate for points. We need to go for it Saturday.

“It’s confidence isn’t it? Losing games and getting beat by Liverpool 5-2 doesn’t help you.

“But we have to motivate the players and make sure they know what is needed to play for this club.