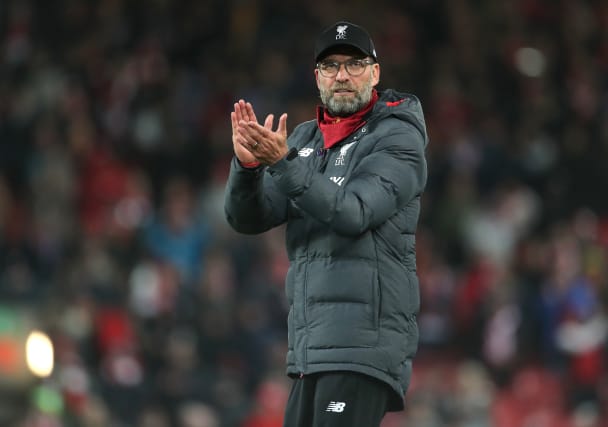 Jurgen Klopp sealed his 100th Premier League win as a manager with Liverpool’s 5-2 victory in the Merseyside derby against Everton.

Only Jose Mourinho has reached the landmark in fewer matches, but Pep Guardiola is poised to top the lot.

Here, the PA news agency compares the records of the five managers who were quickest to notch a century of wins in the top flight.

Mourinho, who took charge of his third Premier League club when replacing Mauricio Pochettino at Tottenham last month, is the quickest manager to have registered both 50 and 100 Premier League victories. He reached the 50 milestone in 63 matches during his first spell at Chelsea (2004-2007) and the ‘Special One’ racked up his 100th win in 142 games in his second spell in charge of the London club (2013-2015). But Guardiola could soon knock the Portuguese off top spot as he has led Manchester City to 97 wins in 129 matches.

Klopp secured his 100th Premier League win in his 159th game in charge of Liverpool after replacing Brendan Rodgers at Anfield in October 2015. Klopp brought up his half-century in 95 games, an identical record to Rodgers, but the German insisted after Wednesday’s 5-2 victory over Everton that the only statistic he was interested in was halting the club’s 30-year wait for the league title.

Ferguson’s record of 100 top-flight victories in 162 matches was surpassed by Mourinho in early 2014 when, ironically, Chelsea beat Manchester United 3-1 at Stamford Bridge. Such was Ferguson’s dominance of the English game during his 26 years as manager at Old Trafford – he won 13 Premier League titles and a total of 38 trophies – it is no surprise he was top of this list for so long, while his all-time Premier League record of 528 wins from 810 matches is unlikely to be beaten.

Wenger, who ended his 22-year reign as Arsenal boss at the end of the 2017/18 season, chalked up his 100th Premier League win in 179 matches. The Frenchman surpassed Ferguson’s record of English top-flight matches managed (823) in his final campaign, while his ‘Invincibles’ went unbeaten throughout the entire 2003/4 league campaign on their way to sealing a third Premier League crown.

The Premier League title eluded Benitez during his six years in charge at Liverpool, but the Spaniard is still among the five quickest managers to register his 100th top-flight win as he achieved the feat in 181 matches at Anfield. Liverpool’s best Premier League performance under the Spaniard was a second-place finish in 2008/9.