Fame has not affected my focus, insists Ruiz ahead of Joshua rematch 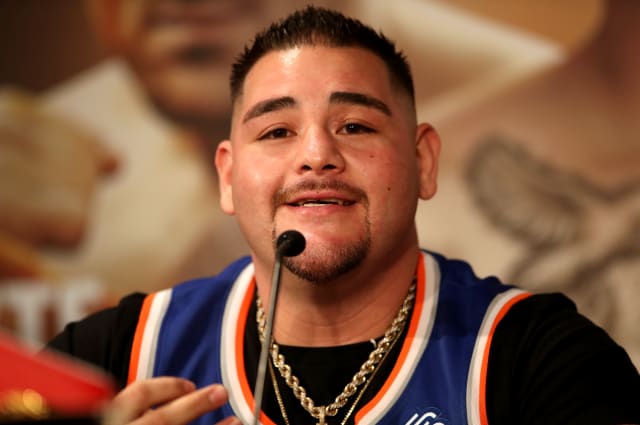 Andy Ruiz Jr is determined to avoid adding his name to the list of the heavyweight one-hit wonders whose reigns were swiftly derailed once they succumbed to the trappings of fame.

Ruiz has splashed out on a mansion plus a fleet of cars worth almost three quarters of a million pounds since his stunning knockout win over Anthony Joshua in their first fight in New York in June.

But the 30-year-old insisted memories of fighting debt and eviction during much of his early career have been enough to keep him firmly grounded ahead of their rematch in Saudi Arabia on Saturday night.

Ruiz said: “I’ve been boxing since I was six years old and after all my hard work and dedication I’m just having fun.

“I’ve been on so many rollercoasters and right now I’m enjoying life with my family – there’s nothing wrong with that.

“The same people who were with me for my first fight are still around me now. I think that’s important because it keeps me humble and reminds me where I’ve come from and how I’m not going to change for anyone.”

Others have found the sudden fame hard. James ‘Buster’ Douglas ballooned in weight after stunning Mike Tyson in Tokyo in 1990 and barely trained for his first defence against Evander Holyfield, rolling to a dismal third-round defeat.

Leon Spinks, nicknamed ‘Neon’ Leon on account of his party-loving reputation, was arrested for drug possession and driving offences weeks after shocking Muhammad Ali in 1978, and duly lost the rematch later that same year.

That Ruiz is adamant he will avoid an equally brief reign owes much to the bond he has struck with his trainer Manny Robles since they paired up in the wake of Ruiz’s first career defeat to Joseph Parker in 2016.

Disillusioned, Ruiz was in the midst of what would become a 15-month break from the sport, but, according to Robles, with whom he shares a tough immigrant tale of success against the odds, there was not a moment they did not believe persistence would pay off.

“As long as Andy shows up to the gym every day he can buy 10 cars and 10 houses,” said Robles. “It doesn’t concern me because it doesn’t have anything to do with training.

“It’s tough when you don’t have a place to live and you’re about to be evicted because you can’t pay the rent, but boxing is a game of patience.

“He was forgotten, but it just takes one opportunity. Keep grinding, keep showing up and something will happen. Luckily it did and we got the opportunity to fight for the heavyweight championship of the world.”

Ruiz is expected to tip the scales at roughly the same as the first fight at the official weigh-in in Riyadh on Friday, in contrast to Joshua, who could come in up to half a stone lighter.

While the theory is that Joshua wanted to make himself more flexible in order to avoid the kind of left-hand bombs which dumped him to defeat in June, Ruiz sees little requirement to change his own approach second time around.

“My mindset is, ‘Damn, Andy, you’ve got to do it again – you can’t let your people down.’ There’s a little bit of pressure but there is more pressure on him trying to redeem himself.

“He’s slimmed down a little bit and I don’t know if he’s going to be faster and move around more. We know he’s going to bring it, so it’s my job to go out there and do the the same thing.”