5 factors which could decide outcome of Joshua v Ruiz rematch 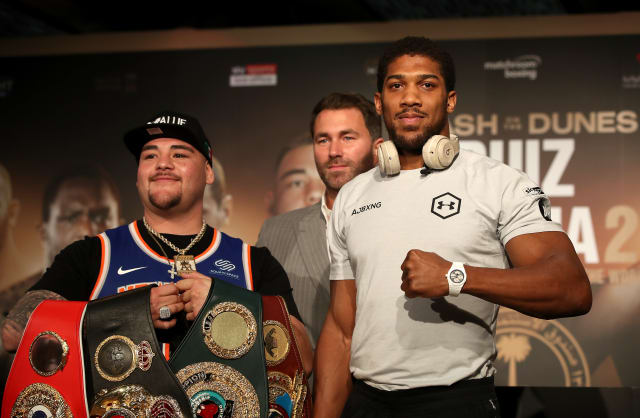 Opinion is split over Anthony Joshua’s chances of wresting back the world heavyweight title from Andy Ruiz Jr in their rematch in Saudi Arabia on Saturday night.

Here the reigning Youth Olympic champion Hopey Price – who will have his second professional fight on the undercard – analyses the five crucial factors to the outcome of the fight.

“Last time Ruiz came in at late notice and Joshua expected to win, so he wasn’t switched on. He thought, ‘this shouldn’t be happening to me’. Whereas this time he knows he’s in against a dangerous man, he knows he’s got to perform under pressure, and he’ll be much more ready for it.”

“I don’t think weight will be as much of factor as some are saying. Joshua will come in at whatever feels comfortable. He looks a bit lighter and a bit quicker, which should allow him to move more. At the public workout he was looking much more fluid with his movement.”

“Ruiz never looks in particularly good shape but there’s been nothing wrong with his stamina so far. But he’s never really been tested down the stretch in a hard fight. If Joshua gets on top for a few rounds, it might be different. I think it will be a bit cagey early on, then it will explode later in the fight.”

“Joshua has to keep Ruiz off him. He has to box clever but he can’t run away. He’s got to hit him and hurt him and be more away. The shot Joshua got caught with last time was a bit reckless. He had Ruiz hurt and he jumped straight back in. This time he just needs to take his time.”

“Everyone talks about what a big puncher Ruiz is, but I think Joshua is a bigger puncher. If he hits anybody with the right shot he’s going to put them away. Ruiz will come at him, and he may walk onto one. I can see Joshua winning in the first six rounds and bringing the belts back to Britain.”