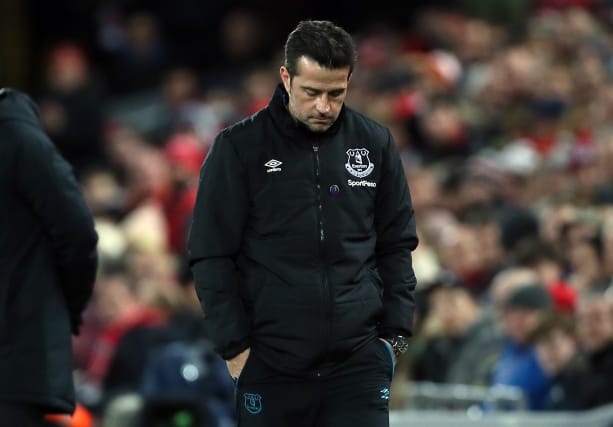 Marco Silva’s 19-month reign at Everton looks like coming to an ignominious end after a 5-2 Merseyside derby defeat against Liverpool at Anfield pushed him to the brink of the sack.

An eighth defeat in 11 Premier League matches saw the Toffees drop into the bottom three and, with matches to come against Chelsea, Manchester United and Arsenal before Christmas, the future looks bleak.

The Portuguese has won just two league matches since the start of September and questions about his future refuse to go away.

Silva could follow fellow former Everton manager Ronald Koeman who was sacked after a 5-2 defeat to Arsenal in October 2017.

“I am not the right person to talk to you about the situation. I cannot answer to you,” he said.

“Since I joined the club and until the last day I am here I will always be 100 per cent professional, giving my best every single day.

“I understand why the questions are coming. If we are winning all the games, you are not asking them.

“It is not for me to take those situations. I don’t like to talk after every single match about my future.”

Silva said virtually the same thing after a last-gasp defeat to Leicester on Sunday in a performance which briefly offered some hope of a renaissance.

However, there was no such evidence at Anfield – where the Toffees have not won since 1999 – and some dismal defending and disorganisation saw their table-topping hosts take full advantage.

Liverpool, who could afford to rest two of their famed front three in Mohamed Salah and Roberto Firmino, were 2-0 up inside 17 minutes thanks to goals from Divock Origi and Xherdan Shaqiri and, although Michael Keane briefly pulled a goal back, they were ripped apart with further goals from Origi and Sadio Mane.

Richarlison’s header just before the break barely papered over the cracks and Georginio Wijnaldum applied the finishing blow in the 90th minute after Mane had missed two one-on-ones to make the scoreline even more emphatic.

“Bad game for us, really bad night as well. They deserved the three points, no doubt and we were not good enough,” added Silva.

“The way we started the game, the way we conceded the goal, the five goals and the more chances they had.

“Always they arrived quicker than us. The way we conceded the first goal was not good enough.

“We should do better, be more brave and win some challenges.

“It was really tough for us. The way we conceded the goals was one thing. Last season we finished the fourth-best defence in the Premier League.

“It was not enough what we did. I have to say to you was not good enough.”