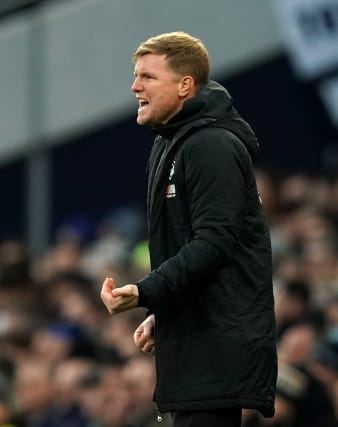 Bournemouth manager Eddie Howe has urged his players to “come out fighting” in order to arrest a slump in form which has seen them win only one of their last nine Premier League games.

The Cherries were presented with the perfect chance to halt that run when Crystal Palace’s Mamadou Sakho was sent off 19 minutes into Tuesday’s clash at Selhurst Park.

Yet Bournemouth struggled to create chances and were stunned when Jeffrey Schlupp dribbled into the area and fired beyond Aaron Ramsdale in the 76th minute to give the Eagles a 1-0 win which moves them up to fifth.

Ahead of Wednesday’s round of fixtures, the south coast club sit 12th in the table and four points above the relegation zone, but could find themselves in further trouble with Liverpool and Chelsea up next.

“There’s no hiding place at this level, it is so tough and so difficult, but the only way you will get there is with the collective and as a group now we have to come out swinging and come out fighting,” Howe said.

“The Premier League is so tough and we now have two really tough games to come, but they are all difficult.

“We knew this was a big game, we knew how difficult it would be, but you have to rise to those challenges and find a solution to the problems you face. We have to do that now and we have to get a result as quickly as possible.”

Bournemouth have suffered four straight defeats since a 1-0 victory over Manchester United at the beginning of November and what has not helped their cause is a hefty injury list.

Steve Cook, who had captained the side in the absence of Simon Francis and Andrew Surman, is the latest casualty after suffering a wrist injury during Saturday’s loss at Tottenham.

“You need your players to be really brave and to stand up and fight for the club, so yes, Steve is a big voice, but we need other players to contribute,” Howe added.

“It is difficult, I don’t want to use it as an excuse but it is the worst time to get injuries because we have so many games and then you’re stretched.

“We don’t want to get to that point again. It was good to have a few back from suspension, but to see Adam (Smith) limp off wasn’t good.”

Palace manager Roy Hodgson also has several fitness concerns with Patrick Van Aanholt forced off in the first half with a hamstring injury.

He joins Joel Ward (knee), Scott Dann (ankle) and Gary Cahill (knee) on the sidelines, while Sakho will be suspended for Saturday’s game at Watford after his red card.

Hodgson added: “Where we have been strong strangely enough is centre-back and blow me down we lose Gary before Burnley, Scott during the Burnley game and in this game we lose another centre-back.

“All of a sudden we’re asking Cheikhou Kouyate to go back and do a wonderful job, which he did.”