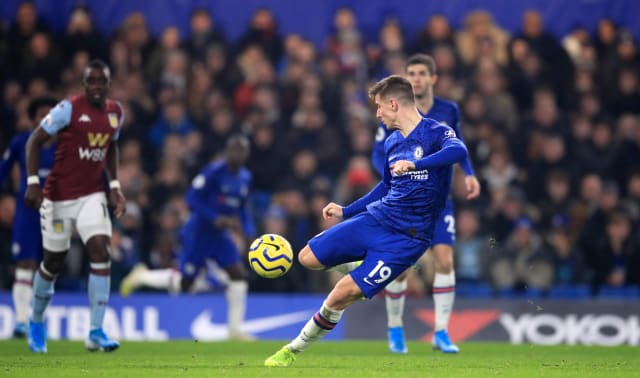 The fast-improving England hitman headed home his 11th league goal of the campaign, then laid on a stunning volleyed winner for Mason Mount.

Abraham shook off a hip injury to lead Chelsea’s line and proved his pivotal status under boss Frank Lampard by spearheading this hard-fought victory.

The 22-year-old hit 26 goals in 40 matches on loan at Villa last term and haunted his former club with a hugely-impressive display.

Abraham said before facing Villa that he feels no pressure in the number nine jersey and wants to create a “legacy” at home club Chelsea.

Maintain this blistering Premier League start and he can write whatever he likes into the Stamford Bridge annals.

Chelsea’s focal point forward limped off late on, but the Blues will hope his exit was a mere precaution amid the hectic Christmas schedule.

The Blues will soon learn whether they can make any signings in January, with the Court of Arbitration for Sport (CAS) preparing to announce the result of their FIFA transfer embargo appeal.

But even if CAS overturns FIFA’s two-window transfer ban relating to the signing of overseas youth players, Lampard might not even bother to chase another frontline striker.

Abraham’s direct hand in one goal per game is a ratio to rank alongside the Premier League’s top strikers, and this was another match-winning turn from the irrepressible forward.

The former Villa loanee exudes confidence beyond his years whether in front of the microphones and cameras, or converting gilt-edge chances in England’s top flight.

Chelsea dominated the first half in every facet bar the scoreline.

Willian checked wide to shoot straight at Tom Heaton when he should have bombed through the middle.

Abraham twice took a swing and a miss in the box as Villa rode their luck, and Mount hit the target but his tame header was never any threat for Heaton.

England hitman Abraham made no false moves when stealing the lead however, nodding in Reece James’ smart cross to toast his return from a hip injury in style.

The muted celebration, head bowed and palms raised, offered an apology to the Villa fans who had so taken to him on his successful loan stint last term.

Chelsea wasted several more promising situations as the half wore on, and wound up paying the price when conceding a poor goal.

Trezeguet had no way of hiding his fluke, having headed Ahmed Elmohamady’s cross onto his own shin before bundling home at the near post.

While Lampard’s men turned around frustrated, that anguish lasted just three minutes of the second half.

Willian flicked in a cross for Abraham, the England star dropped off and chested down – and Mount lashed a stunning volley into the top of the net.

Brazil forward Willian saw a smart shot saved and later had a fine free-kick tipped onto the post by Heaton, while Abraham clipped just wide on a tight-angled one-on-one.