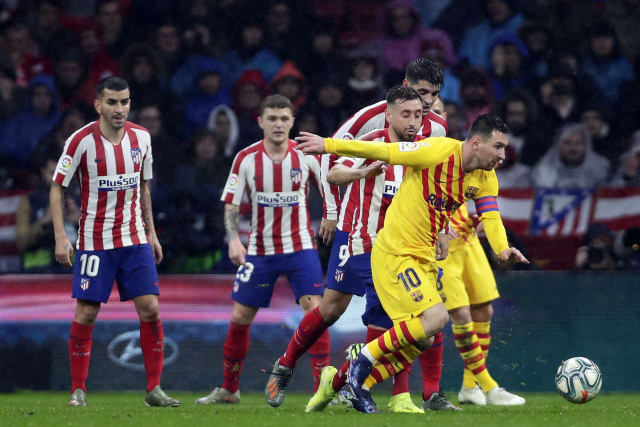 Lionel Messi scored for the first time at the Wanda Metropolitano to lift Barcelona to the top of LaLiga with a 1-0 victory over Atletico Madrid.

Barca hit the crossbar and Atletico struck a post, while Marc-Andre Ter Stegen and Jan Oblak displayed why they are two of the best goalkeepers in the world as the game appeared to be heading for a draw.

But Messi had other ideas in the 85th minute, beating Oblak with a composed finish from the edge of the area to ensure Barca leapfrogged Real Madrid to the summit on goal difference.

The defeat was Atletico’s first in 11 league games, but they have won only three of them and sit six points off the pace.

Barca had to survive an onslaught from the hosts in the first 25 minutes, with Alvaro Morata shooting wide in the first minute a sign of things to come.

The German then produced a stunning save to ensure Barca stayed level, somehow using his left thigh to keep out Hermoso’s close-range volley at the back post from Joao Felix’s exquisite cross.

Hector Herrera then won possession and curled an effort just wide of the post from outside the box.

Barca were slow to get going but when they did they looked dangerous as Messi won possession and fed Ivan Rakitic, via a Luis Suarez dummy, only for the midfielder’s shot to be saved by Oblak.

Suarez had a chance himself, drilling a first-time shot wide, before Ter Stegen displayed sharp reflexes to palm out a Morata header from Kieran Trippier’s corner.

Gerard Pique almost gave Barca a half-time lead, hitting the crossbar with a downwards header from a corner.

The game opened up at the start of the second half and Oblak proved his worth in the home goal.

Messi had a shot saved at the second attempt by the Slovenian, who then held a Suarez half-volley following a fast break.

Messi led another lightning counter-attack, evading two rash sliding tackles before feeding Suarez, but when the striker curled the ball to the other side of the area, the unmarked Antoine Griezmann volleyed horribly over the bar against his former side.

Yet Oblak was finally beaten five minutes from time when Messi picked up the ball on the right, played a neat one-two with Suarez on the edge of the area and coolly side-footed into the bottom corner.