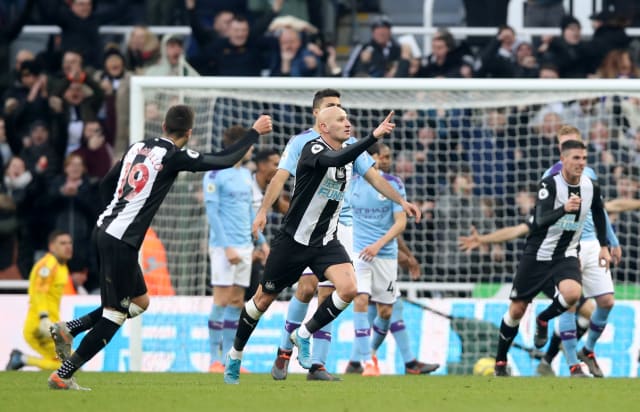 Jonjo Shelvey is confident Newcastle will compete with anyone in the Premier League as long as they work harder than them.

The Magpies midfielder curled home a superb late equaliser to clinch a 2-2 draw with reigning Premier League champions Manchester City on Saturday to allow Steve Bruce’s men to bank a point on a day when few expected them to emerge with anything to show for their efforts.

That was just reward for a battling display which saw he and his team-mates having to defend for dear life for long periods and come from behind twice to deny City the win they needed to stay in touch with leaders Liverpool.

Shelvey said: “We worked our socks off, each one of us put in the 110 per cent.

“When we had possession, we did well and we defended for our lives. You could see the defenders putting their bodies on the line.

“We do a lot of running during the week, but on the pitch, the only time we have been defeated was when the other teams outworked us.

“That of course can’t happen and if we feel we can run more than the other team, we’ll always have a chance in the game.”

The writing looked to be on the wall when Raheem Sterling fired the visitors into a 22nd-minute lead with his 15th goal of the season, but Jetro Willems cancelled out his strike within three minutes after exchanging passes with Miguel Almiron.

The Paraguay international is yet to score in the 24 appearances he has made for the club since his £21million arrival from Atlanta United in January and that was his first assist, and head coach Bruce is hoping he will now build upon a tangible reward for his efforts.

Bruce said: “I’m delighted for Miggy. He’s got an assist – great goal from Jetro. We’ve seen three quality goals and we’ve got two of them, so it was lovely to watch.”

Newcastle could have been forgiven for thinking the game had slipped away from them when Kevin De Bruyne put City back in front with eight minutes remaining, blasting home spectacularly off the underside of the crossbar after chesting down a headed clearance.

However, Shelvey had the final say five minutes later when he swept home Christian Atsu’s clever free-kick to level for a second time.

Shelvey said: “I saw they were sitting deep and I asked Atsu to cut the ball back to me. It was always drifting away from the keeper.

“I know I can do that – I do it in training quite regularly – but it’s important to do it in a match and that secured us a point.”