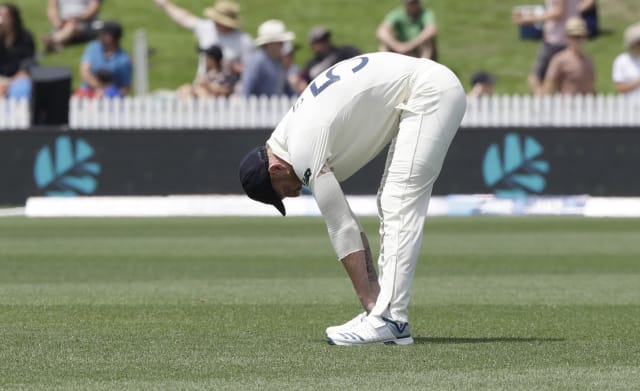 England all-rounder Ben Stokes was brought on to bowl inside the first hour and a quarter on day two of the second Test against New Zealand at Hamilton – despite concerns over his left knee.

Stokes was restricted to just two expensive overs on the opening day after experiencing pain in his left knee, which he admitted he was managing during the first Test at Mount Maunganui.

He briefly bowled on the practice strip with heavy strapping on the area before play and, although it was thought he would have a fielding brief only at Seddon Park, Stokes was introduced into the attack.

With a four-match series against South Africa – which counts towards the World Test Championship – starting in less than four weeks, the move to bring Stokes on to bowl seemed fraught with risk.

England took two wickets inside the first hour on Saturday, with play starting half an hour earlier at 10.30am local time (9.30pm GMT) and 98 overs scheduled because of the afternoon thunderstorm that curtailed day one.

Tom Latham added just four runs to his overnight score of 101 before a rare misjudgement saw him leave a straight one from Broad to his peril as the ball clipped off-stump.

Henry Nicholls then unnecessarily hooked Sam Curran to Broad at long leg on 16 as an overnight 173 for three became 191 for five.

However, with BJ Watling, a double centurion at the Bay Oval last week, and Test debutant Daryl Mitchell settling into their stride, Stokes was brought on to bowl.