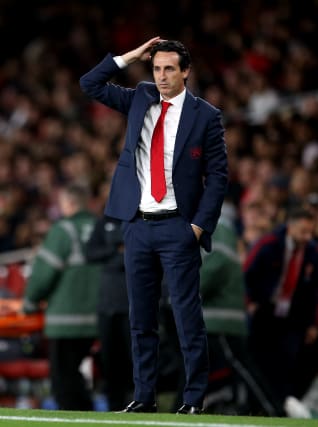 Unai Emery’s time as Arsenal manager is over after he was sacked on Friday.

Here, the PA news agency takes a look at five matches which played their part in Emery eventually losing his job.

Emery’s first remit when he took over from Arsene Wenger was to take Arsenal back into the Champions League.

He had a great chance of achieving that objective with a top-four Premier League finish as the Eagles visited close to the end of the season but, sandwiched between a Europa League quarter-final tie in Napoli and a tricky midweek trip to Wolves, Emery shuffled his pack – with dyer consequences.

The likes of Carl Jenkinson, Konstantinos Mavropanos and Mohamed Elneny were drafted in but could not cope with Palace, who led through a rare Christian Benteke goal before Mesut Ozil levelled for the hosts.

That would not be the end of the drama as Wilfried Zaha and James McArthur struck after the break, with Pierre-Emerick Aubameyang’s consolation not enough to rescue the Gunners, who ultimately missed out on a place in the top four by a single point.

With a fifth-placed finish not enough to secure Champions League qualification, Emery and Arsenal had a second bite of the cherry when they faced London rivals Chelsea in the Europa League final in far-flung Baku.

Emery, a Europa League master having won the competition three years in a row while in charge of Sevilla, would again come up short as the Blues dominated the final.

Former Arsenal frontman Oliver Giroud put Chelsea in front before Pedro doubled the lead and Eden Hazard, in his last game for the club, wrapped up the trophy for the soon-to-depart Maurizio Sarri.

The last thing you want as the manager of a major football club is for your then-captain to admit your team were “scared” as they faced a rousing comeback against a struggling side.

That is what Emery had to contend with at Vicarage Road as what appeared to be a run-of-the-mill victory ended in a damaging draw.

Watford had already changed manager for what was the fifth game of the Premier League season, Quique Sanchez Flores back at the helm and able to celebrate just a second point of the campaign.

Everything looked on course for a simple Arsenal win as an Aubameyang brace had them two goals ahead at the break – but Watford rallied and, as Granit Xhaka said afterwards, Arsenal ran scared – shipping twice as a Tom Cleverley goal from a shocking Sokratis Papastathopoulos and a Roberto Pereyra penalty brought Emery crashing down to earth.

Despite the blip at Watford, Emery saw his side continue to pick up results and they headed to newly-promoted Sheffield United knowing a win would be enough to take them to third in the table.

Everything was in place for a shock – Monday night football under the lights and surrounded by a Bramall Lane crowd delrious at being back in the top-flight and mixing it with the big boys under Chris Wilder.

And the Blades delivered on the promise as Lys Mousset converted the only goal of the game on the half-hour mark, Emery’s side unable to respond as club-record signing Nicolas Pepe missed a sitter.

The result in isolation was bad enough but it started a chain reaction which saw Arsenal take just three points from their next four league games – all coming in home draws to Palace, Wolves and Southampton.

A dismal home defeat to Frankfurt in the Europa League would prove the end for Emery.

Officially, 49,419 tickets were sold but in truth it was the lowest attendance
in the history of a stadium that opened in 2006. With the sparse crowd unable to create any sort of meaningful atmosphere it was up to the Arsenal players to bring the game to life – and they failed to do so once again.

By the end, it was a crop of Frankfurt supporters – officially banned by UEFA
for attending the game – who were being heard over the home fans, plenty of whom were airing their grievances towards Emery, calling for him to leave and
unveiling printed posters criticising his approach.