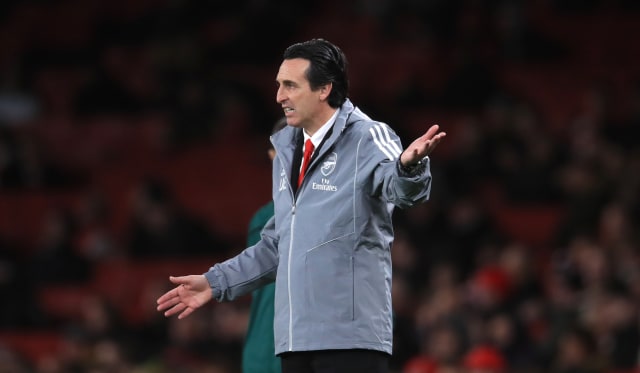 Unai Emery admits his Arsenal players lack confidence but insists they are better than recent form suggests as they slipped to defeat to Eintracht Frankfurt.

The 2-1 loss extended a run of seven games without a win for the Gunners and heaped even more pressure on under-fire Emery.

Pierre-Emerick Aubameyang’s first-half strike had Arsenal on course for a morale-boosting win in front of a sparse Emirates Stadium crowd.

But Frankfurt rallied and left north London with a win courtesy of Daichi Kamada’s nine-minute brace.

Banners were displayed calling for Emery to leave as other names continue to be linked to the post but the beleaguered Spaniard seems keen to battle on despite the latest damaging result.

“Now our moment is not good,” he said. “We need to win and we need to gain confidence. I think we are better than we are showing, everybody, the players, the coaches and me.

“Now we lost some confidence and we need to win. I can understand the criticism about the team, about me. We are not in a good moment and also as a coach, I had that moment also in my career.”

Frankfurt offered very little in the contest and scored twice from their four shots on target as Emery felt his below-par side were unfortunate to lose.

“I think we deserved more,” he said. “We controlled the game in the first half, we scored one goal.

“In the second half we started the same, we needed to score a goal but we lost the control of the game after 15 minutes and they scored two goals.

“I think we improved in the first half and we improved also some things to make sure of our improvement and take the three points.”

Despite the defeat, Arsenal are all-but through to the knockout stages and would need to lose by five goals at Standard Liege next month to fail to qualify.

Frankfurt are also in the hunt to make it into the last 32 following the win and defender Danny Da Costa praised the reaction from the Bundesliga side.

“We didn’t mince our words at half-time when it came to the fact we needed to be a lot more courageous,” he said.

“We were far too complacent in the first half and lacked the confidence to be successful.

“In the second half you could see we believed in ourselves and that there was more desire behind our actions, which led to us winning more 50-50s.”