Chris Woakes returns to England side and dismisses Kane Williamson 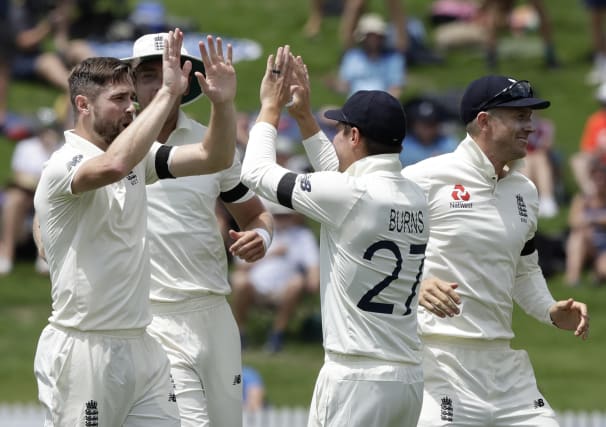 Chris Woakes went a long way to justifying his England recall with the wicket of New Zealand captain Kane Williamson on the opening morning of the second Test at Hamilton.

Woakes was brought back into the fold after missing out in the innings-and-65-run defeat at Mount Maunganui earlier this week as England decided on an all-seam frontline attack, with slow left-armer Jack Leach missing out.

The decision to omit Leach led to scrutiny on social media but Woakes was able to prise out New Zealand’s big fish as Williamson edged low to opposite number Joe Root to leave the Black Caps on 86 for two at lunch.

Tom Latham was in fluent touch in going to the break on 51 not out, with Ross Taylor, who has made five of his 18 Test hundreds on this ground, ominously poised on an unbeaten 21.

This is a must-win Test for England as they look to end the tour by levelling the series at Seddon Park, where Zak Crawley was handed his debut and Ollie Pope took wicketkeeping duties in the absence of the injured Jos Buttler.

After England had elected to bowl first – with Root encouraged by the “live grass” on the wicket – Pope took a couple of eye-catching diving takes behind the stumps but Crawley’s first involvement in a Test shirt saw him concede four overthrows following a woeful shy at the stumps.

Stuart Broad and Jofra Archer were able to extract some movement early on and the former made the breakthrough when Jeet Raval had a flat-footed waft and edged to Root, who took a simple catch at first slip.

Root’s next take was much less straightforward, diving superbly to his right to pluck the ball above the turf after Woakes had induced the outside edge of Williamson, who departed for four to leave the Kiwis on 39 for two.

Archer was once again down on speed, topping 88.1mph, but did trouble Taylor on occasions with the short ball, while Sam Curran was expensive, bowling too straight to Latham in particular.

Latham was all too happy to oblige anything leg-side by routinely clipping through midwicket and he reached an 87-ball fifty from the delivery before lunch.

Earlier in the over, he was given out on 49 when rapped on the pad by Woakes but the decision was overturned when it was shown the ball had pitched outside leg.