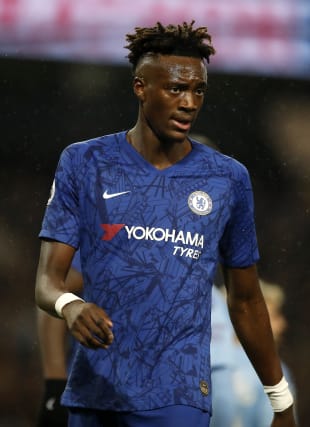 England striker Abraham was carried from the field by stretcher at half-time, having landed awkwardly on his hip.

Chelsea boss Lampard revealed Abraham was in the Blues’ dressing room at the Mestalla Stadium at full-time.

Lampard believes Chelsea’s last-16 destiny remains in their own hands despite missing the chance to qualify with a game to spare in Spain, as Daniel Wass’ fluke goal grabbed Valencia a late draw.

“He’s in the dressing room now,” said Lampard, of Abraham.

“The word at half-time was that it looked quite severe, but the word afterwards was that it wasn’t quite so severe. But that’s all I know at this point now.”

Jorginho was lucky to escape a second booking and a red card for the foul on Jose Gaya that gifted Valencia a second-half penalty, that Kepa Arrizabalaga then saved in style.

Maxi Gomez missed a hat-trick of first-half chances as Chelsea rode their lucky, only for Denmark midfielder Wass to miss-hit a cross that lofted straight over Kepa and into the net.

Lampard insisted Chelsea were not fortunate to avoid defeat, despite the hosts creating and spurning a string of gilt-edged chances.

“I wouldn’t say I feel fortunate, but I didn’t really love the match,” said Lampard.

“Both teams had incredible chances, we had numerous ones in the first-half.

“But there haven’t been very many times this season where I’ve had to say ‘we kind of got away with that’.

“It could have been five-all or six-six, it was one of those games. We should be better defensively than we were today.

“I’m happy to a degree, you come here to win but you respect the opponent, the Champions League and how tough it is.

“It was a really tough match for us but it does keep it (qualification for the last 16) in our hands.”

Chelsea face Lille at Stamford Bridge on Tuesday, December 10 in their final Group H encounter, where Lampard believes the Blues can seal their passage to the knockout stages.

The former Chelsea and England midfielder hailed his goalkeeper Kepa for the fine save from Dani Parejo’s penalty and shied away from criticising the Spaniard in the wake of Wass’ late equaliser.

Asked about Valencia’s second goal, Lampard said: “It certainly was a fluke, he didn’t mean to score which straight away makes it more difficult for the goalkeeper.

“I think the cross came in too high for him. He’s very honest with himself and if he feels he could have got it I’m sure he would say that.

“But it was a fantastic penalty save. That’s what top keepers have to do to save their teams points, and he did that.”