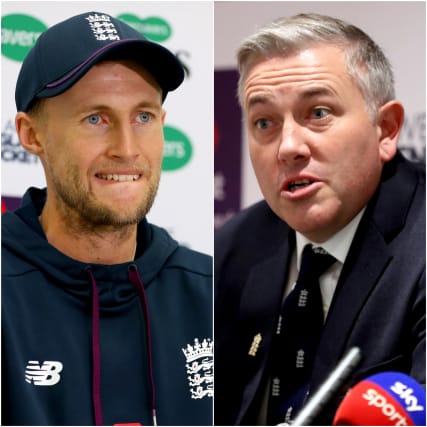 Head coach Chris Silverwood believes he and the rest of England’s backroom team have a role to play in helping Joe Root rediscover his spark with the bat.

The Yorkshireman contributed just 13 runs across two innings in the heavy innings-and-65-run defeat to New Zealand in Mount Maunganui as his average slumped to 27.4 from 10 Tests this year.

His average as England captain now stands at 39.7, which spikes to 52.8 when he is not at the helm, and Silverwood admitted he and assistants Paul Collingwood and Graham Thorpe can help ease the burden on Root.

“Behind the scenes we’ve got to keep trying to strip away the things he doesn’t have to worry about,” said Silverwood.

“Making sure that when it comes to practice he’s just one of the lads, he’s in there and he’s worried about his batting and that’s it.

“So there’s things like that and helping him and talking to him and try to strip pressure away.”

Root and Silverwood have preached a mantra of patience with the bat going forward and although there was some evidence their message was sinking in as their run-rate hovered at barely more than two an over for most of day one, a number of top-order players were out to some loose strokes as they battled in vain to keep the series level.

“It’s not going to happen quickly but at the same time we’re not telling them how to change their game. What we’re saying is ‘this is the plan, adapt your game to get us there’,” said Silverwood.

“I’m not telling them how to play, I’m just saying ‘here’s A, there’s B, use your skills to get us there basically’. I think the more we do it and the more we try to adapt to that plan, the better we’ll get at it.

“We’ve got to give it a little bit of time.”

Joe Denly was one of the few who came out of the Test with his reputation enhanced after shuffling back down to three in the order, having opened in the last Ashes match.

The Kent right-hander contributed 74 in the first innings and was the only batsman to face more than 100 balls on the final day, where he was only prised away from the crease when a Neil Wagner delivery reared off a length and brushed the glove on the way through to the wicketkeeper.

“I’ve made some decent contributions but it’s frustrating getting these starts,” said Denly, who has reached 50 or more on five occasions in nine Tests – including four in his last four – without going to three figures.

“Like any top order batter, when you get in, it’s going on and making it count. I haven’t been able to do that.

“I try not to make a big thing of it. I’ve scored hundreds before in county cricket. I’m sure if I keep making these starts and learning, that big score is just around the corner.”

As New Zealand dutifully compiled a monumental 615 for nine declared on a docile Bay Oval surface over the weekend, Denly’s leg-spin was curiously unused, leading to questions about whether he was fully fit.

But Denly revealed he is “pretty much pain-free” after an ankle injury which had left him doubtful for the series while there has only been “a little tightness” in his quad.

He added: “I might have to reiterate to Rooty that I am able to bowl! I would have liked to have a bowl in this game. He did tell me to warm up just before (Mitch) Santner got out. Then he got out so I didn’t get that chance.”