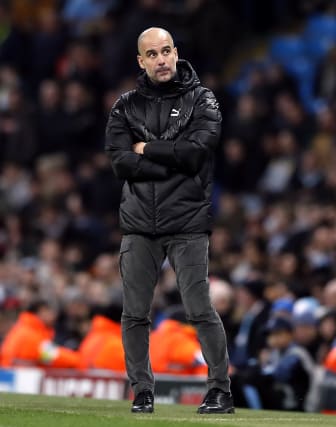 Pep Guardiola warned of tougher tests ahead after his Manchester City side secured their place in the last 16 of the Champions League.

The Premier League champions played out a dull 1-1 draw with Shakhtar Donetsk at the Etihad Stadium but the result was enough to clinch top spot in Group C.

It is the seventh successive year City have reached the last 16 but, after going out to rival English sides in the quarter-finals in the past two seasons, Guardiola expects a step up in intensity.

The City boss said: “Seven years in a row means you have to qualify seven times and being there to go through.

“But now it is time to focus on the Premier League.”

A laboured City finally broke the deadlock through Ilkay Gundogan in the 56th minute but Shakhtar responded to claim a deserved point with a Manor Solomon equaliser.

“In the second half I saw good things and things we have to improve,” Guardiola said. “But of course we’re in the next stage and that’s the most important thing when you start the group stage.”

The result means City’s final group game against Dinamo Zagreb will be a dead rubber for them, but Guardiola insists he will take the trip to Croatia next month seriously.

Zagreb will be competing with Shakhtar for second place in the group behind City.

Asked if he might make changes for the game, Guardiola said: “If we need someone in Zagreb then we’ll use the first team. It’s the Champions League, it’s prestigious.

“We’ll travel with the intention to win. Of course always you need to have a sense of urgency to take the result and win the games, but out of respect for Shakhtar and Atalanta we have to do that.”

Shakhtar had produced fine comebacks in their previous two away games – to beat Atalanta and draw in Zagreb – and coach Luis Castro was pleased their hopes were still alive.

Castro said: “To get a draw at City is fantastic. We have a family atmosphere and we all get on with each other.

“We had a game in Zagreb where we knew if we lost we were more or less out. Now we may have won nothing but we haven’t lost anything yet either.”