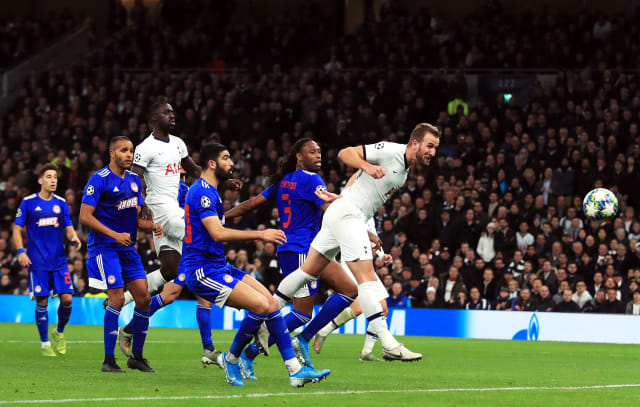 Tottenham booked their place in the Champions League knockout stage for a third successive year with a brilliant 4-2 comeback win against Olympiacos in Jose Mourinho’s first home game in charge.

It had looked like the Greek side were about to ruin Mourinho’s big night as they capitalised on a truly woeful opening 30 minutes by Spurs to lead 2-0 after 20 minutes thanks to goals from Youssef El Arabi and Ruben Semedo.

Dele Alli’s reply just before the break proved pivotal as it gave Mourinho’s men a base to produce a fine second-half blitz, with Harry Kane grabbing a brace and Serge Aurier capping a fine performance with the goal of the night.

Kane’s double sent him into the record books as he is now the fastest player to 20 Champions League goals, only needing 24 games.

The victory, a second in two games for Mourinho, means that Spurs can go to Bayern Munich in a fortnight with their place in the last 16 already secured, though they are unable to top Group B even if they win in Germany.

But the manner of their early performance could have the alarm bells ringing for the new boss, who saw his side produce a display that had all the hallmarks of the end of Mauricio Pochettino’s reign.

If Spurs thought that the arrival of Mourinho would provide a quick fix then the horror show that was the opening half hour proved how fanciful that idea is.

Olimpiacos, without a win in the competition so far, were ruthless enough to capitalise on some gaping holes in the Spurs defence and stunned their hosts by surging into a 2-0 lead after just 20 minutes.

With only six minutes on the clock an awful clearance by Danny Rose fell to El Arabi and he was allowed space to drill a low shot into the bottom corner from 20 yards.

Son could have equalised when he saw his header saved by Jose Sa, but it was a shambles at the other end and the Greek side doubled their lead from a set-piece as Semedo converted from close range after a corner was flicked on.

Olympiacos boss Pedro Martins, who hailed Mourinho as a trailblazer for Portuguese coaches, said that his compatriot may not have had time to fully prepare for this game and he was proved right.

Mourinho had seen enough and hauled off defensive midfielder Eric Dier, replacing him with Christian Eriksen, though in truth any of the outfield players could have no complaints if they were the one taken off.

In the end it was a defensive error that allowed the hosts to change the complexion of the game in first-half added time.

Yassine Meriah will have nightmares about kicking at thin air when Aurier put an innocuous cross in as that allowed the ball to go through to Alli, who had the easiest of tasks inside the six-yard box.

That proved a decisive moment in the match as five minutes after the restart Spurs were level.

Mourinho, when he was in his second spell at Chelsea, once memorably told a ballboy at Crystal Palace he would be “punched” if he continued to delay returning the ball.

But he was in a far more loving mood with one of his own ballboys as the youngster quickly returned the ball to Aurier, whose throw-in set Moura free down the right and his pull back was perfect for Kane to slot home.

It gave his side 40 minutes to try and find a winner and they needed 23 of those.

The goal came from an unlikely source, but it was a fine finish as Aurier bent a low effort into the bottom corner after Alli’s cross found its way to the back post.

Spurs gave themselves breathing space four minutes later as Kane scored his 23rd of the season for club and country.

The England captain got on the end of an inviting delivery from Eriksen and headed home in style.