Ernesto Valverde calls on Barcelona to rise above expectation 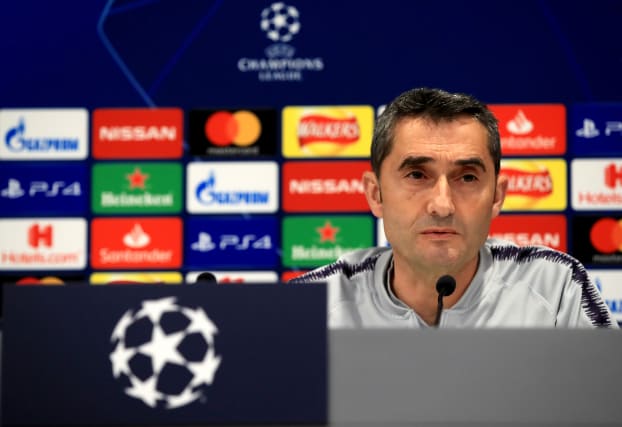 Barcelona coach Ernesto Valverde wants his side to rise above the constant wave of expectations as they aim to beat Borussia Dortmund and reach the Champions League knockout stages.

The Blaugrana needed a second-half fightback to win 2-1 at bottom club Leganes with a late goal from Arturo Vidal to keep themselves top of LaLiga ahead of Real Madrid.

Valverde, though, accepts learning to deal with the pressures of leading from the front comes with the territory at the Nou Camp.

“The waves are always going to be there, we are not going to fool ourselves,” the Barcelona coach said.

“We come from winning a match in which we have suffered. Here at Barcelona, it is required to win, to make a soccer lesson in every game and sometimes it is complicated.

“The good thing about football is that when you talk a lot and there is a lot of football, there is always a game after which you can win, play well and make people happy.”

Valverde added at a press conference: “We can improve things from the other day and there are things we can do better.

“There are also things that we have to settle with. The attitude of the team was very good and you also have to value those things.

“We are looking to get results with our style of play. We always look to attack, but sometimes the opponent doesn’t allow us to or makes things difficult for us.”

Barcelona are top of Group F, a point ahead of Dortmund, and can make sure of a place in the last 16 with victory on Wednesday night.

The Spaniards would also progress if Slavia Prague beat Inter Milan, or both the games end in a draw.

“It’s a very important match in terms of qualification – and for them too. If we win, we’ll be top of the group and of course that’s what we want,” Valverde said.

“We are strong at home and the prize to be had from this game is huge. Dortmund will be going for it, too.

“Any of the other three sides in the group would swap positions with us right now, but we are not underestimating Dortmund.”

Barcelona will be without defender Gerard Pique through suspension, Clement Lenglet is carrying a calf strain while full-backs Nelson Semedo and Jordi Alba remain sidelined.

Samuel Umtiti, himself returning from a serious knee injury, can provide some cover at the back, and midfielder Ivan Rakitic is fit from an Achilles problem, having came on as a second-half substitute at Leganes.

Favre’s side are sixth in the Bundesliga following a 3-3 home draw with bottom club Paderborn – which was only salvaged by late goals from Axel Witsel and Marco Reus.

“We have to do a great job tomorrow, Barcelona is a very strong team,” Favre told a press conference.

“We had a number of great chances (against them) at home and pressed and defended well. We have to do the same tomorrow.”