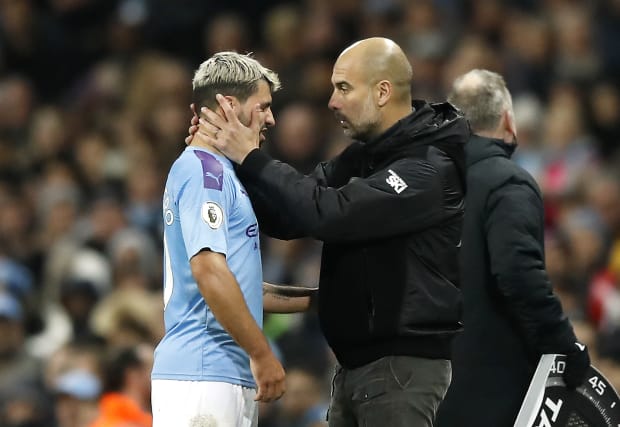 Sergio Aguero will miss next month’s Manchester derby after being ruled out for “a few weeks” by manager Pep Guardiola.

The Manchester City striker suffered a thigh injury in the Premier League champions’ victory over Chelsea at the Etihad Stadium on Saturday.

Guardiola is unsure how long he will be without the club’s record goalscorer but he is already resigned to him missing the home clash with Manchester United on December 7.

Speaking at a press conference to preview Tuesday’s Champions League clash with Shakhtar Donetsk, Guardiola said: “He will be out a few games, a few weeks. I don’t know exactly.”

Asked about the United game, the Spaniard added: “Maybe we will have a miracle but I don’t think so.”

Aguero’s absence will mean an opportunity for Brazil striker Gabriel Jesus to lead the line.

The 22-year-old said: “I am not happy because Sergio is injured. I don’t like it when my friends are injured but I work here every day and I am ready to play. Every time in the training session because I want to improve everything.”

Spanish pair Rodri and David Silva will be available to face Shakhtar after they were withdrawn against Chelsea with cramp.