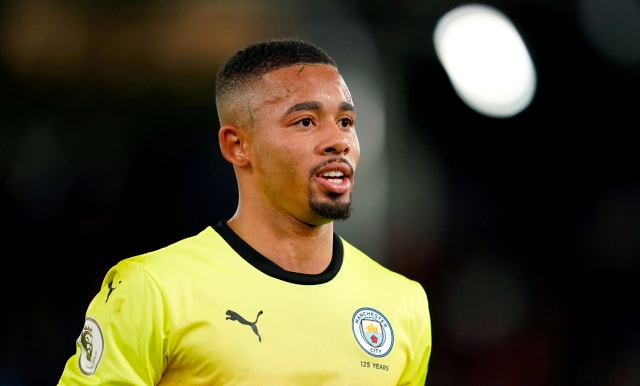 Gabriel Jesus is ready to put what he has learned from Sergio Aguero into practice as he takes his place in the Manchester City side.

Premier League champions City will be without their record goalscorer Aguero in the coming weeks after the Argentina striker suffered a thigh injury at the weekend.

His absence will mean an opportunity for Brazil international Jesus, who has largely been kept in the wings by the brilliance of Aguero this season.

With Aguero sidelined until after the derby against Manchester United on December 7, that will start with Tuesday’s Champions League clash at home to Shakhtar Donetsk.

Asked what he had learned from Aguero, Jesus, who has scored five goals in eight starts this season, said: “A lot. Sergio is a great guy and top player, so I had to do that, learning with him.

“I am not happy because Sergio is injured. Of course I don’t like it when my friends are injured but I work here every day and I am ready to play.

“When I decided to come to City I knew it was going to be hard because we have Sergio, who is the top scorer of the club and he scores every game.

“I knew this but (here) I have a chance to play with Pep (Guardiola), with top players at a great big club. That is why I came, to enjoy and learn.”

Jesus made an immediate impact when he arrived at City from Palmeiras in January and even supplanted Aguero in the team for a spell.

But injuries hampered his progress and Aguero’s form since has made it difficult for the 22-year-old to get back into the side.

Manager Pep Guardiola, who prefers to play with one striker, has been impressed with how the Brazilian has handled that situation.

Guardiola said: “To cope with that is not easy for Gabriel, but there is no other striker at this level who can be so humble and accept this situation as Gabriel.

“I’m not happy that he doesn’t play. He never missed or failed one training session in a bad condition or for bad behaviour. That’s why when he says he wants to learn, it’s the truth.

“Sometimes the players say that to be gentle with the manager or with the media, but that’s the reality. He’s an incredible guy in those terms.

“Of course we are going to miss Sergio because we need him and unfortunately we’ve had a lot of problems this season with injuries – big ones with Leroy (Sane) and (Aymeric) Laporte.

“But meanwhile we have Gabriel and (Raheem) Sterling, who can play in that position, so we are going to live without him for a while.”

Avoiding defeat against Shakhtar will see City book their place in the last 16 for a seventh consecutive season.

Guardiola said: “The position we have is good, we have 10 points, but we are not qualified. We have to do our best to go to Zagreb (for the last game) with the job done and that’s what we’ll try to do.”