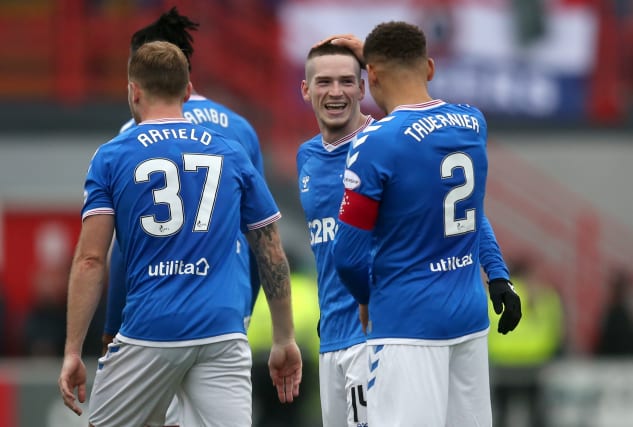 Ryan Kent scored his first goals since his summer return to Rangers to help his side to a 3-1 victory at Hamilton.

But £7million winger Kent restored the visitors’ lead just before half-time with a strike worthy of the hefty transfer fee it cost to secure his move back from Liverpool, before wrapping things up in stoppage time.

Rangers dominated the opening 45 minutes but eased off after the break and were lucky not to drop points as Hamilton threatened an equaliser.

But after edging to victory, the Light Blues new rejoin title rivals Celtic on 34 points, with the reigning champions remaining top on goal difference.

With Gers’ top scorer Alfredo Morelos only touching down back in Glasgow 24 hours before kick-off following international duty with Colombia, Gerrard decided to start with him on the bench.

But there were contrasting fortunes for the teenagers in the opening stages, with 17-year-old Hamilton at fault for Rangers’ seventh-minute opener.

James Tavernier skipped past Scott Martin down the right before firing in a low cross. Centre-back Hamilton stopped the cross but succeeded only in setting the ball on a plate for Ryan Jack to roll home his fourth goal of the season.

That was the perfect start for Rangers and it almost got even better as Kent weaved inside from the left and drilled the ball off the base of Luke Southwood’s right-hand post.

But the smile was soon wiped for Gerrard’s face as Accies levelled in the 14th minute.

Mikael Miller threw over a deep cross from the left which Steve Davies did well to reach and nod down for Smith.

Filip Helander blocked his initial effort, but the 19-year-old was alive to the rebound as he headed home.

There was no sense of panic as Rangers patiently went about picking holes in the hosts’ defence.

Jack was repeatedly left in space outside the box to shoot or fire in dangerous crosses.

But Accies survived, as they did when Aaron McGowan used an arm to stop a Kent strike.

However, their luck ran out two minutes before the break as Kent produced a moment of sublime quality to put Rangers back in front.

Jack and Tavernier worked the ball to the former Liverpool winger just outside the box and he did the rest, dropping a shoulder to give Johnny Hunt the slip before rifling an unstoppable strike into the top corner.

Accies tried to respond again. Miller did brilliantly to rob Kent early in the second period and fire over another deep cross but Hunt could not convert.

There was a bigger scare for Rangers in the 65th minute. Smith sprayed a terrific ball in behind for substitute George Oakley, whose low cross somehow failed to end up in the net as Miller slid in.

Gers had lacked the control and intensity of the first half but came within a whisker of a third with a quarter of an hour remaining as Helander rose high to nod a Kent free-kick wide.

There was a final heart-in-mouth moment for Rangers as McGowan picked out Oakley late on but goalkeeper Allan McGregor came to the rescue.

Morelos was introduced with seven minutes left but that was enough time to see him booked for a flick out at Miller and grab an assist three minutes into stoppage time as he rolled the ball to Kent, who calmed the fraying nerves of the Gers support with a cool finish.