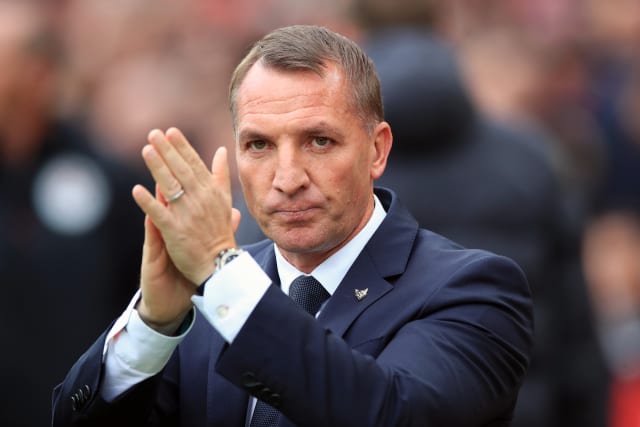 Brendan Rodgers dared Leicester fans to keep on dreaming after the Foxes strengthened their hold on second place with a 2-0 victory at Brighton.

Jamie Vardy bagged his 12th goal of the season – at the second attempt from the penalty spot – as Leicester secured their sixth successive victory in all competitions.

The England forward also played a role in Ayoze Perez’s 64th-minute opener before dispatching the second spot-kick after VAR ruled the initial penalty had to be retaken.

When asked if he had been practising how to answer questions regarding Leicester’s chances of winning the Premier League title again, Rodgers said: “It’s OK, as long as you’re asking me in April, it’s fine.

“We’re happy we’re not shying away from anything but I think, there’s 13 games gone.

“What’s really pleasing is the consistency for Leicester City, we arrived and they were 12th when we came here in February, and we wanted to improve and build on the good work that Claude (Puel) had done.

“And what’s great now is that our supporters are singing, ‘we’re going to win the league’ in the most competitive league in the world so that tells you where they’re at, the confidence that they have and the dreams that they have, which is absolutely brilliant.

“For me it’s keeping the team focused because you have to work, what you’ve done in the previous 12 games has gone, it’s being judged on today and I thought we put in a terrific performance and another clean sheet for us.

“In the last five (Premier League) games we’ve scored 15 goals and conceded one and that’s the hunger in the team and we need to keep that going.”

Brighton goalkeeper Mathew Ryan felt Leicester got the result they deserved and wants his side to bounce back ahead of their trip to Liverpool on Saturday.

Ryan told the club website: “(Leicester) have got quality, which is obviously why they’re in the position they are in.

“They’ve got a system which is working really well and they are implementing it on a consistent basis at the moment.

“They’ve got a great engine room there in the midfield and an established back four with dynamic full-backs.

“They’ve got plenty of pace up front and plenty of service there too. We did well to hold on in certain aspects, but they probably had the majority of the shots on target and asked more questions, so they come away as the victors.”

On the next game, the goalkeeper added: “We just have to dust ourselves off, learn, try and grow from this performance, and go to Anfield with an idea of what we want to do; hopefully, it can prove to be successful for us.”