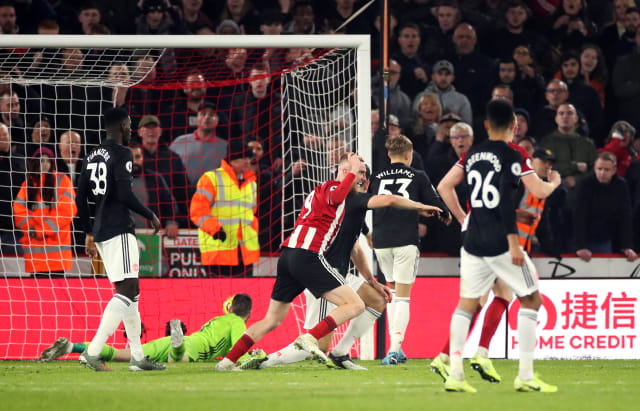 Substitute Oli McBurnie secured Sheffield United a deserved share of the spoils as a thrilling, helter-skelter clash with Manchester United ended in a 3-3 draw.

Chris Wilder's promoted side have been so impressive this season that few eyebrows were raised at the fact they headed into this encounter ahead of the 20-time league champions in the standings.

The Blades put on another stirring show of organisation and creativity on Sunday and were on course for their first win against Manchester United since 1993 thanks to John Fleck's bundled effort and a fine Lys Mousset strike.

The visitors were outthought and outfought for long periods at a bouncing Bramall Lane, but, with the shadow of the newly out-of-work Mauricio Pochettino looming large over Ole Gunnar Solskjaer, his side went on the most unlikely of seven-minute scoring sprees.

Yet Wilder's men are made of stern stuff and dug deep, with McBurnie coming off the bench to secure a draw in the 90th minute as a crazy game came to a fitting conclusion.

Bramall Lane rocked from start to finish, where the warmth shown to returning Harry Maguire only extended to the pre-match reception as the United defence was penned back once the raucous rendition of 'Greasy Chip Butty' was over.

The gap between defence and attack coupled with wayward passing left the visitors under pressure from the outset and David De Gea pulled off a superb double save in the 11th minute.

John Lundstram hit a superb volley that forced a flying one-handed from the Spaniard, who was back on his feet when the ball came back across to deny David McGoldrick's close-range header.

The Blades striker should have scored but there were no murmurings of frustration around Bramall Lane, only an increase in anticipation and noise.

Phil Jones, making his first Premier League start of the season, came off worse in his second duel of the afternoon with Mousset and Wilder's men struck.

Chasing a ball down the flank, the French forward unceremoniously knocked Jones to the turf and play was allowed to continue by referee Andre Marriner.

Mousset continued to cutback for Lundstram, whose shot was saved by De Gea but bundled home by Fleck in front of the Kop.

The visitors looked shaken and Jones particularly frazzled. The defender foolishly gave away a free-kick that Fleck fizzed into the box, with the slightest of touches by Fred preventing a quickfire second.

McGoldrick was denied before Anthony Martial mustered the visitors' first shot on target in the 29th minute – an effort met by ironic cheers given the anonymity of their attack in a first half that could easily have been worse.

Jesse Lingard came on for the hapless Jones at half-time, but an early Rashford effort and more directness was undone by poor play.

Mousset capitalised on typically poor play by Andreas Pereira, before playing out to Fleck and making a lung-busting run from inside how own half towards the United goal.

Found by Fleck, he showed no little confidence and skill to send a superb low strike past De Gea.

The Red Devils were left reeling but attempted to reduce the deficit. Maguire went close, Daniel James' cross threatened and Martial hit wide, with Mousset limping off as an amazing afternoon threatened to unravel spectacularly.

With 72 minutes on the clock, James made space down the right to clip over a cross that was only cleared into the path of teenager Williams, who fizzed a stunning volleyed effort into the far corner.

What looked to be a consolation effort was soon added to as Greenwood, on for Pereira, prodded home a lovely cross from Rashford.

Sheffield United looked punch drunk and the visitors capitalised, grabbing a third in the 79th minute as good work between James and Martial down the left flank led to the former cutting back for Rashford to sweep home in front of a shellshocked Kop.

The Blades faithful had been silenced temporarily, but the hosts would not roll over.

In the dying embers of normal time, substitute McBurnie collected a cross in the box and struck home an effort that lifted the roof – a goal given the green light by VAR at the end of a thrilling game.