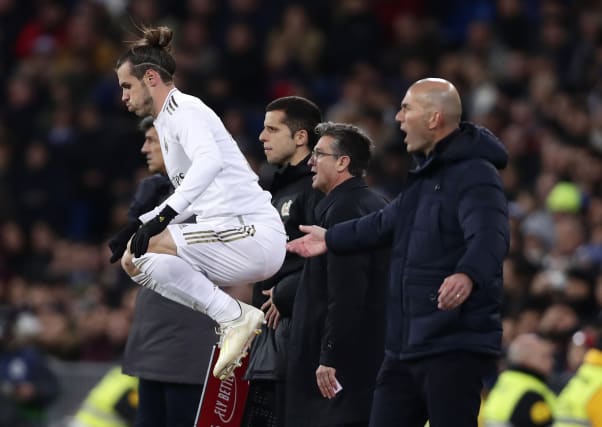 Head coach Zinedine Zidane hopes Real Madrid fans will not give Gareth Bale a hard time for too long.

The Wales forward came off the bench to a chorus of jeers before helping Real Madrid seal a 3-1 win over Real Sociedad at the Bernabeu.

Bale was sent on for the closing stages with whistles ringing in his ears, following the latest country versus club row during the international break.

The former Tottenham man, though, kept his cool to send over a deep cross which led to Luka Modric wrapping things up with a third goal.

Bale had been criticised in Spain after being pictured celebrating Wales’ Euro 2020 qualification victory over Hungary in midweek with a flag which read “Wales. Golf. Madrid. In that order”.

Zidane, though, called for a sense of perspective after the forward produced a determined display, Real Madrid recovering from a terrible start when Willian Jose punished a poor defensive backpass from captain Sergio Ramos.

“I hope this doesn’t carry on for the rest of the season,” Zidane said in quotes reported by Marca. “We want the fans to be with us from the beginning to the end, but we cannot control that,” the Real Madrid coach said.

“The public has the right to do what they want, but I ask that they applaud everyone. I’m happy with the game and the victory and Bale came into the game well.

“What you have to do is keep working on the pitch.”

Zidane added: “I have not spoken to him (about the jeers), I have only congratulated him.

“I can’t tell you if it’s unfair or not. Everyone can say what they want. We need our fans, then we can’t control what happens.

“There is too much noise with Bale, he wants to be with us and do it well. That is why we don’t want to talk so much.

“He is integrated into the group and wants to play, just like everyone else.”

After Real recovered from their poor start, Karim Benzema equalised from Luka Modric’s free-kick, before a deflected shot from Federico Valverde put the home side in front soon after the restart.

Zidane felt his team had responded well, now back level on points with LaLiga leaders Barcelona.

“We didn’t start well with the ball, we were very slow. Then, the end of the first half was very good and the start of the second half also,” the Real Madrid coach said.

“There was a very good team playing against us, so we are happy for the three points.”

Real Madrid have little time to regroup as they host Paris St Germain in the Champions League.

“What we want is to play a great game. We have to rest well, because this game has taken a lot from us,” Zidane said.

Real Sociedad coach Imanol Alguacil was left to reflect on what might have been.

“I am happy with the first part of the match, and I think we deserved more, although Real did have eight very good minutes,” he said.

“We have had opportunities and if we had taken them, the mood would have been different.

“We had clear options to make goal. I’m happy because the team has pressed on our rival’s goal throughout the match.”