Vardy and Leicester’s hot streak continues with win at Brighton 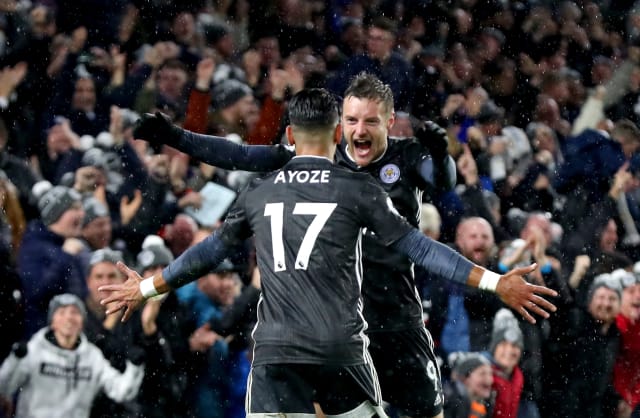 Jamie Vardy continued his scoring streak as Leicester strengthened their hold on second place with a 2-0 win over Brighton.

The forward bagged his 12th goal of the season at the second attempt from the penalty spot as Leicester moved three points clear of Chelsea, ahead of their clash with Manchester City.

Vardy, the top-flight’s leading goalscorer, also played a role in Ayoze Perez’s 64th-minute opener, as the Foxes secured their sixth successive victory in all competitions.

Leicester had dominated throughout the first half, with 11 shots to Brighton’s one, but had been unable to make the most of their chances, before a quick counter-attack in the 64th minute following a Brighton corner, when Vardy played the ball through to Perez, who tapped home.

The game was not without it’s moments of VAR controversy however, when referee Mike Dean awarded a Leicester penalty in the 80th minute, before the technology was used twice in quick succession.

Vardy stepped up to take the penalty following the review, but his effort was saved and James Maddison nodded in the rebound.

VAR then intervened for a second time, and the decision was taken to retake the penalty, and Vardy made no mistakes from his second attempt, firing the ball past Mathew Ryan to bring Brighton’s streak of three successive home victories to an end.

Leicester came close to taking the lead after less than two minutes, when a Maddison cross found its way past the Brighton defence, and fell to Perez at the far post, but, from the narrow angle, his header hit the bar.

Brighton had to resort to some last-man defending, which saw Adam Webster, who had just returned from injury pick up a yellow card for a slightly cynical foul on Preez after giving the ball away in the midfield.

The Foxes got a good foothold in the first half and continued to search for the opener, as the home side were forced into hasty clearances, including one from Aaron Mooy from almost on his own line.

Harvery Barnes had two chances to take a lead for the visitors, his first a long-range effort which forced Ryan to tip the ball behind and his second opportunity went over the bar.

Brighton struggled to get into the game throughout the first half, and had to wait until the 41st minute for their first attempt on the Leicester goal, with Shane Duffy sending his header over the bar without troubling Kasper Schmeichel.

In contrast to the first half, it was the Seagulls who came closest to breaking the deadlock, with Martin Montoya’s shot deflected over the crossbar.

Moments later, Leicester broke on the counter-attack, but Perez was unable to make the most of the opportunity after being played through by Vardy.

Brighton were caught out from a quick break by the visitors of their own corner in the 64th minute, Perez made no mistakes at the second attempt, slotting the ball into the net from a Vardy pass to take the lead for Leicester.

Almost immediately after coming on, Demarai Gray was judged to be brought down in the area by Webster with the referee awarding a penalty after a VAR review

The league’s top goalscorer Vardy stepped up to take the penalty, only for Ryan to make the save, but Maddison headed the ball into the net.

After a second VAR review, the penalty was retaken, with Vardy firing the ball into the net to secure the win for his side.