Jiminez strikes again as Wolves show their teeth against Bournemouth 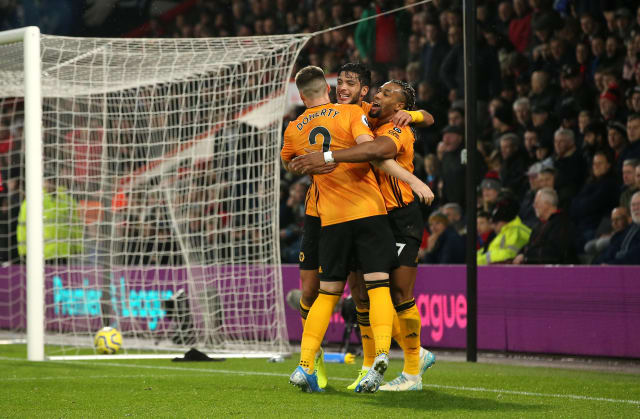 Raul Jimenez continued his red-hot scoring streak as in-form Wolves made it eight Premier League games unbeaten with a 2-1 success at 10-man Bournemouth.

Mexico striker Jimenez claimed his sixth goal in seven games to double Wanderers’ lead after Joao Moutinho opened the scoring at the Vitality Stadium with a superb free-kick.

Bournemouth, who played 53 minutes a man down after captain Simon Francis was sent off on his first top-flight start for 11 months, pulled one back in the second period through Steve Cook but were unable to salvage a point.

Victory for Nuno Espirito Santo’s visitors lifts them to fifth place in the table ahead of Thursday’s Europa League game at Braga, while the hosts drop to 11th after just one win from seven league fixtures.

With a trip to face new Tottenham boss Jose Mourinho to come next week and December fixtures against leaders Liverpool, Chelsea and Arsenal on the horizon, Cherries boss Eddie Howe had stressed the importance of this game at his pre-match press conference.

A hamstring injury suffered by Norway forward Joshua King on international duty forced Howe into the only change made by either manager, and he was left to rue switching to a back five to accommodate Francis.

The 34-year-old’s rustiness was soon exploited as Wolves took a 21st-minute lead thanks to a moment of magic from Moutinho.

Francis, who suffered serious knee ligament damage at Spurs on Boxing Day last year, was booked for scything down Diogo Jota on the left of the 18-yard box, allowing Moutinho to expertly capitalise on the resulting set-piece with a dipping effort which deceived Cherries goalkeeper Aaron Ramsdale and flew into the far corner.

Without King and with goalless £20million January signing Dominic Solanke left on the bench, the hosts were offering little at the other end.

They fell further behind 10 minutes later as Jimenez benefited from static defending to register his 14th goal of the campaign in all competitions.

A quick free-kick from Portuguese midfielder Moutinho released Adama Traore on the right wing and he squared to leave Jimenez with a simple tap-in.

Bournemouth’s afternoon then took a further turn for the worse as Francis again failed to contain Jota.

Moments after Cherries defender Cook scrambled the ball off the line to deny Jimenez his second, Francis was deservedly shown a second yellow card by referee Simon Hooper for cynically pulling back his opponent before taking out his frustration on the door to the tunnel.

A dismal opening period prompted Howe into a double half-time substitution as Philip Biling and Harry Wilson made way for Jefferson Lerma and Arnaut Danjuma.

The reshuffle helped lift the understandable gloom among the home fans and, in the 59th minute, they halved the deficit.

Defender Cook met Ryan Fraser’s left-wing corner at the near post and his header flicked off Traore before nestling in the bottom right corner.

Wolves failed to replicate their dominant first-half display, although Jota nearly put the result beyond doubt with a powerful drive which was turned wide by Ramsdale at the end of a counter-attack.